I was looking forward so much to seeing this film. The trailer was obscure enough to make me curious, and with each fantastic review Somersault received I became more and more excited.

Somersault is definitely a beautiful film. The cinematography is awesome, and there are moments of breathtaking beauty. Unfortunately this is sometimes overstated, and the film kinds of gets sidetracked into moments of ‘ooooh, pretty!’ 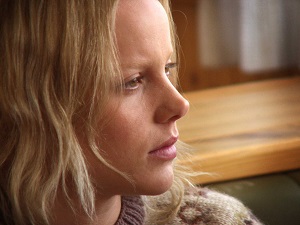 The main problem I found with Somersault was that the beautiful imagery wasn’t balanced by a fantastic story. There’s nothing wrong with the plot per se, but I would have liked to see a little more complexity. Sure, it deals with concepts of intimacy and love – what separates them and what happens when they are substituted for each another. But that wasn’t enough. Heidi’s predicament was interesting but never held me enthralled.

Abbie Cornish is fantastic, and Sam Worthington delivers an incredibly realistic performance as Joe. The supporting cast are all there, and the music is fine. In fact I’m now having trouble explaining what I found disappointing about Somersault.

The fact of it is that I was never as involved with the characters as I should have been. I was far more attached to Meg in Blue Car (a very similar film) than Heidi. Sure, she’s vulnerable and has an interesting mix of timidity and nonchalance about her, but I don’t think we fully understood her situation to begin with. There was very little explanation as to why she took that catastrophic first step at the beginning of the film. A fantastic performance simply isn’t enough – I needed a great story to back it up.

I know, I know, I’m bagging a very good film that has managed to surface in the decidedly constrained Australian film industry… but I figure that Somersault has got so many good reviews by now that I won’t be affecting the ticket sales too adversely.

I think Cate Shortland’s next film will be awesome. Somersault felt as if it didn’t quite have the depth it needed to present a truly touching and heartbreaking story. I really wanted this film to be incredible, but it wasn’t.