One would think (hope?) that we are at the end of the post 2001 plane thriller craze. From Red Eye and Flightplan to the ‘ultimate’ plane disaster movie, United 93, the studios have been feeding our fear of flying rather regularly. 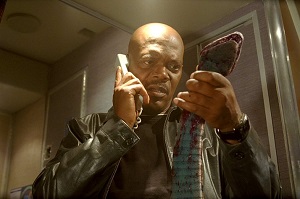 Snakes on a Plane is perhaps the most extreme type of B-grade film – one that wears such a classification proudly, and steadfastly refuses to become anything more. Not in the slightest bit self-effacing or satirical, it goes from stupid to ridiculous, and if not for the massive word-of-mouth campaign that preceded, it probably would have been sent straight to the DVD rental shelves. There are very few moments intent on humour; rather the filmmakers have hoped that the absurd plotting will be inherently amusing. Despite all this, the film is rather satisfying in a moronic kind of way, and I’m sure this was the intent.

The good thing about snakes is that they can squeeze in anywhere and are frighteningly quick when they want to be. These two characteristics are great for a confined-space thriller. Firstly the writers don’t have to worry about the how – cos everyone knows those pesky reptiles can get in anywhere; and secondly any particularly dull moments in the film can be filled with a CGI snake leaping at the camera. The computer-generated snakes rarely look real, however the motion capture is good enough that they do fit pretty well into their physical surroundings.

Samuel L. Jackson and the rest of the cast play the movie straight as can be, never batting an eye at the rather strange leaps of logic made by the script. The stereotypes are numerous enough that proceedings rarely get dull – plus there’s those deadly snakes ever ready to strike at the camera.

The moments from re-shoots seem rather obviously inserted into the film, though maybe if I hadn’t read about the studio’s decision to up the violence (and thus the classification) I wouldn’t have noticed.

This is B-grade at its proudest, and not bad entertainment at all. Couldn’t imagine watching it a second time though…

Snakes on a Plane