The first film starring Ellen Page to be released in Australia post-Juno was always likely to suffer by comparison to that brilliant gem, and unfortunately Smart People meets that expectation.

Dennis Quaid is Lawrence Wetherhold, a literature professor teaching at Carnegie Mellon University and attempting to get his rather dry book on critical theory published by a large publisher. In spite of being tenured he seems to have lost his interest in teaching and his students know it. When a head injury brings him into contact with a former student turned medico Dr Janet Hartigan (played by Sarah Jessica Parker), his failure to move on emotionally after the death of his first wife is brought into sharp relief and Wetherhold must confront the unhappiness he and his family live with on a daily basis.

Although Quaid is fair as the grizzled Wetherhold, the romance he is supposedly developing with Hartigan is a complete non-starter. This isn’t the first film in which a character played by Parker is almost entirely devoid of charisma such that her relationship(s) seem artificial (another recent example is The Family Stone), and in Smart People this lack of spark between Hartigan and Wetherhold is critical.

Page and Thomas Haden Church do manage a degree of believable interaction as Wetherhold’s daughter and adopted brother respectively, but the decision to insert a crisis in their relationship – however useful it may have been felt by the writers in terms of developing their characters – means the film is robbed of the one relationship with any interest. Page nails her role as the rather appalling Vanessa, although she may have been better off choosing a less eloquent character to allow audiences to see another side of her ability after Juno and Hard Candy. Haden Church may also wish to review his role selection given the proximity of this performance to his best-to-date in Sideways.

Aside from the failure to engage the audience that essentially dooms the film as a romantic drama, or perhaps because of it, Smart People justs feels so lacklustre. The slow-moving plot and character development suggest something deeper to say, however the audience may well be too anaesthetised to appreciate its subtleties. The insertion of yet another Haden Church bum-shot certainly doesn’t liven things up enough to compensate.

Parker’s appearance in another dull film does nothing to support her claim she can adequately lead on the big screen in spite of the enormous success in her small screen career, but the near-certain success of Sex and the City later this year may allow her the breathing space to get one last shot at breaking through in a character other than Carrie. Let’s hope her choices improve.

Smart People is indeed a disappointing feature. It’s almost as if there’s a great film lurking somewhere beneath the surface that never gets a chance to break out. The characters are well defined yet believable, and their viewpoints so entrenched that they should be at odds with each other. Yet nothing much really happens. 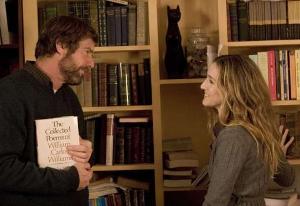 The film actually states that there are no epiphanies to be had – maybe it was trying to avoid cliché, but in doing so simply destroyed any possibility of truly gripping drama.

Ellen Page’s conservative, Young Republican Vanessa is morally a long way from Juno, yet is still quick witted with a smart mouth. Once we see her wow us as a lazy, stoner archetype or a sullen, monosyllabic trauma victim, we’ll know that she’s truly got range. Dennis Quaid is perfectly cast, yet his character is simply too dull, and I’m not the best judge of Sarah Jessica Parker – I almost always find her devoid of charisma, sucking the energy out of the best of films. Thomas Haden Church is in fine form, and probably trying to regain some credibility after Spider-Man 3 (aren’t we all?). The entire cast do a good job, but there’s not enough to work with.

I wanted a bit more melodrama in Smart People. It didn’t really have all that much to say, other than the rather depressing notion that academic and monetary success goes hand in hand with social ineptitude and loneliness. The film coasted along without really trying too hard. It was enjoyable – there were a handful of good laughs, and it’s hard to dislike such interesting characters – but I kept waiting for something truly special to happen, something that would be memorable.

Instead I found myself sighing, shrugging my shoulders and relegating it to the ‘nothing special’ column.