More than just a spoof, Slither is writer/director James Gunn’s gift to the zombie genre. This movie pays respect to its origins, from sci-fi creature flicks of the 1950s to Romero’s Night of the Living Dead, and is effectively a loving recreation of all of those films put together. 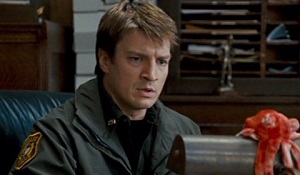 The film shifts gears from horror to comedy regularly, and Nathan Fillion (Serenity) is perfectly cast, having the uncanny ability to switch between action hero and lovable clown at any given moment. Elizabeth Banks (The 40 Year Old Virgin) stars as the unrequited love of Bill (Fillion), and Michael Rooker looks (unintentionally?) scary enough from the very moment he pops on camera, with his hairless pate and oversized glasses.

Slither is a rarity in today’s feature film climate, and lovingly embraces its sillier moments, rather than laughing them off or dressing them up in fancy VFX. Not to say that there aren’t any special effects on show – the film boasts some marvellously over the top prosthetic and digital effects – but there’s something primal and wonderfully tangible about a couple of would-be victims staring at a completely unbelievable slimy slug the size of a football in the middle of the woods at night.

Considering that on average this film seems to have had more favourable press than The Da Vinci Code (released the same day here), I was a little disappointed with Slither. It’s rarely laugh out loud hilarious, and the film does drag a little as the characters slowly work out that which we the audience have known from the very beginning (even if we haven’t seen this kind of film many times before). But had I seen it in the right environment – namely a science fiction marathon, or at least around the TV with friends – I’m sure it would have been better.

Slither doesn’t do anything new, it merely does what’s been done before a little better. Not in the least bit pretentious or overblown, it’s an entertaining enough diversion.

←The Da Vinci Code Riding Alone For Thousands Of Miles→