Okay, I’m gonna be up front here: Sin City is the best comic book adaptation ever. I’ve read the first ‘Sin City’ collection, and it was astounding just how much like Miller’s comic this movie was – almost completely frame by frame. I’ve never seen a film that looks more like a comic. The Hulk tried, with lots of split screen action that was supposed to represent frames on the page, but unfortunately was handicapped by being a completely pointless and irritating film. X-Men was great, but I never really liked the comic much to start with. And of course there’s the Allan Moore adaptations of The League Of Extraordinary Gentlemen and From Hell – neither of which came close to the brilliance of the source materials.

Sin City looks incredible. The dark, rainy streets of Basin City come to life beautifully, and the set-like quality of the film (I imagine most of it was done in front of a green screen) only adds to the eerie noir-ishness. It’s much easier to believe in comic heroes (or anti-heroes in this case) and villains when the entire world is make believe, rather than a guy in a wetsuit swinging from buildings (Spider-Man) or a dude carrying a sword through downtown in peak hour (Blade).

Shooting the film in black and white was the only way to go – I can’t imagine Sin City in glorious colour, it just wouldn’t work. Even better are the truly comic strip moments where the images are reduced to a negative silhouette of the action.

The trio of directors have done an incredible job. Not once does Sin City seem like an awkward production-by-committee affair in the way Four Rooms did (which featured two of the same directors). Frank Miller obviously had the common sense to ensure his vision reached the screen with perfection, and this is probably Rodriguez’s best film.

Sin City features a stellar cast, all of whom revel in the bleakly masculine world. This is a place where the women act the way men want them to, and men act like they wish they were (or something like that). Everyone gets a turn to shine in what is very much an ensemble performance. Mickey Rourke is getting better and better in every film I see him in, and the role of Marv was practically made for him. Bruce Willis is well in his element here, and whilst it took me a while to warm to Clive Owen, he also made the role his own. Rosario Dawson seemed a bit uncomfortable, but it was great to see Rutger Hauer reminding us that he is actually a great actor (when not stuck in such straight to video titles as Redline (Deathline)). Nick Stahl is fantastic as usual, but it was Elijah Wood that gave the best performance, especially since we’d never seen Wood in a role like this before. He was exactly like the Kevin from the page – it’s hard to believe that Miller didn’t have these actors in mind when writing the comic.

You have to have patience for such thick, cumbersome dialogue. It’s rewarding once you get used to it, but all the same I am surprised that this film has been as popular as it seems to have been. At times I found it a little slow, and it could have done with a shorter running time. But any of the issues I had with the film were really problems I had with Frank Miller’s writing. This is a comic flawlessly transposed to the big screen.

Just as audiences may have gotten tired with comic book adaptations, we are blessed with Sin City. I hope the raising of the bar is a sign of things to come – especially with V For Vendetta and The Watchmen in the works.

I’m afraid I’m going to receive some angry emails again after this review, but I can’t bring myself to say I loved this film. Sure, it’s incredible to look at, but the characters are caricatures only, and the storyline just didn’t get me in… 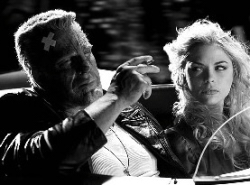 Stuart loved this film, I could see it in his face as he eagerly lapped up every image. And it is wonderfully shot. Frank Miller’s graphic novel must have been un-put-downable, if every page dripped with images like this. Robert Rodriguez has shot every scene with the most amazing attention to lighting and colour, and the care taken produces what is likely to be the most satisfying visual experience of 2005, and may well bring Oscar glory.

Unfortunately, a well-shot film isn’t a salve for failing to enthrall the viewer, and in my case, it failed. I was so overwhelmed by the visuals, that when I took a moment to consider whether I cared about any of these characters, I realised I sadly didn’t. Perhaps their lack of redeeming qualities got to me? Whatever it was, I cared about some of the players as much as they seemed to care about each other, or themselves.

The acting is generally good, although I can’t quite understand what Stu was raving about when discussing Elijah Wood’s performance as Kevin. Bruce Willis and Mickey Rourke are both excellent, Clive Owen is adequate, but Jessica Alba is given sparse detail to allow her bring Nancy to life, and struggles accordingly. The bit parts? The cast is incredible, and features both past and present of Hollywood stardom – Carla Gugino mixing with Alexis Bledel, Rutger Hauer with Rosario Dawson and Josh Hartnett. It is a credit to the pulling power of Rodriguez and Tarantino that they were able to convince several major players to feature for only a few minutes on screen.

In the end, I just didn’t care enough what happened to these people to enjoy this film. It is incredible to watch, and deserves all the plaudits that have come its way since being released over three months ago in the USA. But would I watch it again? Sadly, no.

←The Door in the Floor 9 Songs→