Shrek 2 is pretty disappointing, although it passes the time.

Shrek was a surprise success, and along with Monsters, Inc. really solidified the notion of made-for-adults animation. It had charm, wit, good songs, and a fun story. The characters would be accepted by children, but the humour loved by adults. My mates loved Donkey, thinking it Eddie Murphy’s best work in years. Three years later and Myers and co. are up for Shrek 2, and not much has changed. Donkey is still annoying, Shrek still has insecurity issues, and Princess Fiona just wants to be loved by her great big ogre of a husband. The characters are the same, the clever references to fairytale creatures and modern movies are still there, but the magic has gone.

Maybe it is just that – that more of the same isn’t going to satisfy us? Sure there are laughs to be had here, and the addition of Puss In Boots was a masterstroke. But it just felt kinda tired to me, like a pale imitation of a former glory.

The music is intrusive and frustrating. Whereas Shrek had a wonderful soundtrack – a great closing song and music that complemented the images – Shrek 2 has an over-the-top song list, too many song-and-dance numbers, and was just too loud. Give me a moment of respite please! The ending of Shrek with ‘I’m A Believer’ was fantastic, but there was nothing of that quality here.

The use of fairytale creatures is still pleasing, with characters like Fairy Godmother, Pinocchio and The Gingerbread Man providing welcome distraction. Donkey is much the same, but Puss In Boots is the real star. His innocent face is a treat, and Antonio Banderas does an excellent job of voicing this character.The other vocal stars include Jennifer Saunders, John Cleese, Julie Andrews and Rupert Everett, all of whom seem to relish their chance.

Whilst there are some pleasing aspects, it is in many respects an Ugly Stepsister to its more well-rounded elder sibling Shrek. Disappointing in comparison, it is enjoyable in parts, but not the brilliant film we could have hoped for.

Okay, so now I feel like I’m being contrary just to be cool (have a look at Spider-Man 2 to see the root of my paranoia). But I simply don’t see what’s so good about the Shrek movies. I thought the first one was entertaining, yes. But with regards to all the ‘adult humour’ and general hilarity, I must have missed something. I reckon Toy Story had more complex humour than Shrek. Or maybe it’s just that the humour in Toy Story is character-driven rather than simply full of offhand pop-culture references. 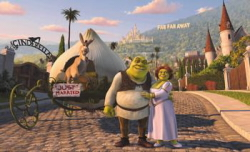 Shrek 2 is definitely inferior to the original. What starts out as a promising premise soon degrades into a predictable kids movie.

There is nothing clever about random pop culture and movie references. Sure, some of them made sense, but at other times it seemed like they were simply doing it to fill in time. I mean, the Alien take-off?? And The Lord Of The Rings??

Yes, the animation is great, but they weren’t going for realism so it’s not really that impressive. The voice talent is good. And as you’ve probably already heard, Puss In Boots is a great character, but (as you may have also heard) his inclusion simply means that Donkey has half the number of lines.

As with the first Shrek, the bits I found the funniest were the incidental lines, often in the background. This isn’t clever or mature entertainment, however, and it annoys me that so many adults say it is. Go and watch ‘The Simpsons’, for gods’ sake. (Notice my incredibly inclusive religious stance… it’s not a typo people, I know what to do with apostrophes).