The eminently amusing Amanda Bynes is in overdrive for She’s the Man, an update of Shakespeare’s Twelfth Night by the same writers that brought us the similarly Shakespearean 10 Things I Hate About You. It’s a traditional teen romance/comedy with a gender-bending edge, and all of its flaws are countered by the unstoppably wacky force that is Bynes. 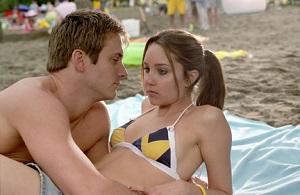 After first impressing me in Big Fat Liar, she’s slowly made her way into bigger and bigger roles, and this film is certainly tailor made for her antics. Her wild physical comedy would be annoying in anyone else, but somehow her irrepressibly high-energy moments make this film a joy to watch. Dressed as a boy she doesn’t convince anyone, but plausibility isn’t really an important factor of She’s the Man. The supporting cast really have no chance to be funny themselves, and everyone else plays its straight except for David Cross as the principal (who was clearly hired to more or less resurrect his character from ‘Arrested Development’) and Julie Hagerty (doing a similar version of the airhead mum role from Just Friends) as Bynes’ mother.

It would be stupid for a teen gender bending comedy not to delve into some cruder scenarios, and She’s the Man goes there without ever getting too crass, which is a small mercy in today’s post-American Pie entertainment. After striking a fine balance between reality and comedy it slips up towards the end, with some rather unlikely narrative results, but it stays fun, which is the main thing.

More a vehicle for Bynes than a brilliant film in its own right, satisfaction will only be gleaned if you usually dig her performances. She could very well edge into Jim Carrey territory now, with substandard films slapped together in the hopes that she’ll get to jump around like a crazy person. Hopefully she won’t get stuck in such a rut, or, if she does, an Eternal Sunshine of the Spotless Mind breakthrough-like scenario will come round a little sooner in her career.

←The Weather Man Grave of the Fireflies→