It’s a shame for Guy Ritchie that his over-hyped and brimming-with-star-power second big screen adaptation of the antics of seminal detective Sherlock Holmes comes at a time when a competing small screen adaptation has redefined these characters in the minds of many. Simply put, Mark Gatiss’ and Steven Moffat’s BBC version starring Benedict Cumberbatch and Martin Freeman is so spectacularly wonderful, Ritchie’s sequel to his moderately successful 2009 Sherlock Holmes never stood a chance.

In A Game of Shadows, Dr Watson (Jude Law) is to be married, bringing to an end his crime-fighting partnership with Holmes (Robert Downey Jr.). Meanwhile, Holmes has been studying the activities of Professor Moriarty closely enough to start to uncover a pattern, and when he confronts his nemesis it becomes clear that although Watson thinks he is leaving this life behind him, both he and his bride face mortal danger. Gypsies, surgeons, weapons manufacturers and ambassadors intermingle and only Holmes can save the day.

It appears Ritchie has taken none of my criticisms of his first Holmes film on board, as this second suffers from most of the same problems. Primarily, and perhaps most acutely, both Sherlock Holmes and A Game of Shadows are only barely reminiscent of Sherlock Holmes films, and would more readily sit amongst any bland action/comedy outings. Stephen Rowley suggested the first film was very similar to Shanghai Knights, and I have to admit the same thing occurred to me during this edition. There is little evidence of Holmes’ remarkable intellect or skill in deduction, with only his brawling technique allowed to suggest superiority to any other action hero. For a character as well known and loved as Sherlock Holmes, this simply won’t do.

When fighting, Holmes is shown envisaging the progress of the fight in advance of the action, with the ‘bullet time’ effect overdone in demonstration of his ability to plan his takedowns well before his opponents have even realised they’re going down. Ritchie then proceeds to show almost none of the actual fight, preferring ridiculous cutting and camera effects that serve only to pull his audience out of their immersion in the film. That this kind of action is now passé is not Ritchie’s fault, but it is no longer good enough to slap up a blurry image for split seconds before replacing it with another and yet another in a flurry of editing, panning and cutting if it serves no purpose. Also, given Ritchie appears to have been keen to strip any of the ‘Sherlock Holmes-ieness’ from the film and make it just another action/adventure, it seems silly to not, you know, show the action.

The performances are adequate, although Ritchie sadly maximises almost none of the awesome acting firepower available to him. It seems wasteful beyond imagination to give so little depth to characters played by Downey Jr. and Law, and their squabbles and banter seem shallow and unworthy. I can generally watch Downey Jr. in anything, but I have little interest in watching either of his outings as the venerable Holmes again. Noomi Rapace does as much as she can with her limited role, and Rachel McAdams reprises Irene Adler for little reward. It is only Jared Harris as Moriarty who seems to be having much fun, and he brings a delicious evil to his turn as Holmes’ longstanding antagonist.

Much as in Sherlock Holmes, the only real success here is in the film’s design: both London and Paris are evocatively captured while costumes and makeup support the director’s vision admirably. Unfortunately, A Game of Shadows is far too long, with little evidence of the director having any idea how to bring together his plot and characters to a satisfactory conclusion without dawdling so long that his audience loses interest.

Sherlock Holmes: A Game of Shadows is another shallow and ultimately disappointing adaptation of Conan Doyle’s work, and can be easily skipped in favour of the wonderful small screen version now screening its second season on the BBC.

I’d have to agree with Mark on this one. When it comes to Ritchie’s reimagining of the classic literary detective, I have no problem with making him an action hero. That would be fine, as long as he was still, you know, A DETECTIVE. A Game of Shadows is like the first film: Holmes doesn’t do much at all in the way of detecting. Instead, he seems to be some sort of clairvoyant, anticipating his opponents’ moves. Call me a traditionalist, but I expect a Sherlock Holmes story to contain an actual mystery. Make him a tap-dancing Lithuanian poodle from the 35th Century – I don’t care – as long as he still gets to solve mysteries.

I would also agree that the best parts of the film are the production values. 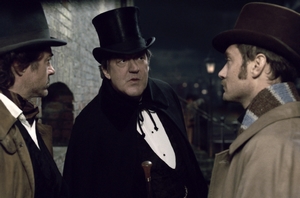 The sets and costumes are exquisite, and you can practically smell 19th Century London. Hans Zimmer’s score is rousing also, and a great expansion of his work in the previous film.

Rapace is indeed wasted. It’s a pity that after blowing us all away in The Girl with the Dragon Tattoo (Män som hatar kvinnor), her move to Hollywood is so… uninspiring. Here’s hoping her turn in Ridley Scott’s Prometheus gives her more opportunity to flourish. Stephen Fry’s along for the ride here also, as Sherlock’s brother Mycroft. It sounds like genius casting, but like Holmes, he doesn’t get to show any of his intellect, and instead is reduced to being the butt of rather pathetic humour. I guess a film like this would be forgivable if it worked well as a comedy, but aside from sporadic laughs, it does not. Any film that resorts to familiar equations such as ‘fat naked man = funny’ and ‘gypsies = thieves’ isn’t trying very hard.

The thing is, the casting is perfect. It’s just that the script gives them nothing interesting to do. Chekov doesn’t just have a gun here; he’s toting a veritable arsenal. Predictability is the order of the day and there really are few surprises. I’m with Mark: BBC’s ‘Sherlock’ is much better than Ritchie’s version, and that’s taking into consideration that one of the four episodes thus far has been a dud.

A Game of Shadows is a decent enough timewaster, and if nothing else, a lot of good work went into the look and feel of the film. The novelty of the first film has worn off, however, and what we’re left with is sorely lacking.

Sherlock Holmes: A Game of Shadows