Jackie Chan’s Hong Kong action movie history has made for a difficult transition into the mainstream Hollywood action flick. He has long been an incredible performer, his martial arts and comedic ability rarely equalled. 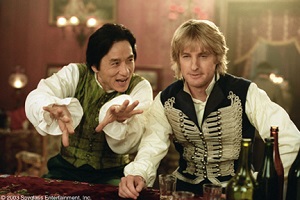 The action scenes were the best part of this sequel to the superior Shanghai Noon, but they simply weren’t as good as they could have been. It seems that – unfortunately – with recent films such as Shanghai Knights studio directors don’t know what to do with Chan. There were many moments in Shanghai Knights when they should have pulled the camera back and simply watched him in action. The fast paced, snappy editing not only jars against Chan’s uncanny abilities, but is unnecessary. Chan doesn’t need any tricky editing to hide any parts of his stunt work because he is a master of his craft.

As I said this film isn’t as good as the original, mainly because a lot of the humour that worked so well in Noon simply isn’t here. I think I once gave a slight chuckle during this film, but that was it (in fact it could have been a burp, I’m not sure).

The two leads survive this film admirably, even if the sets look comical and the accents sound phoney. This is another recent Hollywood movie filmed in the Czech Republic (like Blade 2, Van Helsing and The League Of Extraordinary Gentlemen), and I was certainly never convinced that we were actually in London.

The supporting characters do quite well, even if there is a bit of ‘wink wink, nudge nudge’ each time we find out their names. And special mention should be made of Aiden Gillen’s hair, which is way too funky for the 1880’s but looks cool all the same.

This film spends much of its time ripping off Indiana Jones and trying to make fun of exceedingly simple cultural stereotypes. I find it hard to imagine that many people find the concept of spotted dick really that funny (even those in the US, at whom this film is clearly intended).

Had this film been a good 90 minutes, I might have been impressed. However at 1 hour 50 I was quite often too bored to care.