I’ve been waiting for a cinematic adaptation of ‘The Spook’s Apprentice’ for nigh on ten years now, so you should know this is going to be one of those “Why did the change everything from the books!?” kind of reviews. 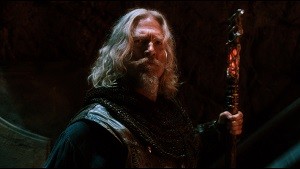 Joseph Delaney’s books appeared two thirds of the way through Harry Potter’s publication run, and it’s clear that they were marketed as a much darker alternative to J.K. Rowling’s incredibly popular series. The series was called ‘The Wardstone Chronicles’ and it told the story of Tom Ward, the seventh son of a seventh son, and his apprenticeship to Master Gregory, the county Spook. One of the series’ strengths was its much less labyrinthine plotting (at least compared to Rowling’s books) and the fact that it made for almost-scary reading. Oh, and they’re quite gruesome. I knew something was wrong the moment the casting for Seventh Son was announced. Tom was going to be played by 31 year old Ben Barnes. This is of course Tom who was aged 12 in the first of Delaney’s books. *megasigh* Early on, Gregory (Jeff Bridges) says, “Kind of scrawny for a seventh son, isn’t he?” No, Jeff, he’s not. He’s friggin’ Hollywood-buff.

I can see why the producers found themselves in a bit of a pickle, to be honest. As you probably know, novels can be a lot more horrific on the page than movies can on screen. And ‘The Wardstone Chronicles’ get pretty grisly indeed. As dark as the Harry Potter movies got, they at least had the benefit of starting out rather cutesy and innocent. This meant the audience could grow up with the films, so they’d be old enough to see the M-rated entries by the time they reached the screen. Seventh Son didn’t have any such luxury.

Next problem: the books in the Spook series are actually quite short. The writers of Seventh Son presumably knew they couldn’t make 13 films, and thus clearly felt the need to speed things up. This means that the film covers some events that don’t happen until a few books in. Part of the genius of Delaney’s work was the sense that Tom had to start out small, and undergo years and years of training. Hell, the books had him throwing a length of chain at a stake stuck in the ground for what felt like chapter after chapter. Then there were the incantations he had to learn and the Spook’s manual that he had to memorise. He made mistakes and errors of judgment time after time. The movie, on the other hand, has a quick knife throwing montage before he’s off fighting dragons and whatnot. There’s no sense that Tom has grown, that he’s learnt new skills.

When it comes to Bridges, his gruff, near unintelligible drunk shtick is wearing thin. It was a revelation in True Grit, mildly amusing in R.I.P.D., and now it’s simply tiresome. 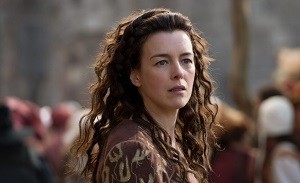 The Gregory from the books was curt yet oh-so world-weary (Daniel Day-Lewis would have been great, even if this clearly wouldn’t be his type of gig.) Olivia Williams fares a little better as Tom’s mum, whilst Alicia Vikander has none of the coarse determination that defined the character of Alice.

Ah yes, Alice. One of the greatest parts of ‘The Wardstone Chronicles’. She Who Wears Pointy Shoes. Rude, stubborn and with a hint of darkness about her. Her movie incarnation is none of these things.

The movie’s in such a damn hurry that it has little time to set up any story. Instead, plot signposts rush by as we speed down the narrative superhighway. There’s a lot of talk about Destiny and Prophetic Dreams and Fate. And every single significant plot point is clearly articulated well before it arrives. The film stumbles from one visual effects sequence to the next, all the while forgetting that, for the most part, the battles from the books took place in barns, out on the moors or perhaps in a ruined dungeon or two. In Seventh Son, we have huge cities that seem to be inspired by Qarth from ‘Game of Thrones’. All I remembered from the books were lots of rain and mud in the English countryside.

In case you haven’t been able to gauge my opinion yet, Seventh Son is a rubbish adaptation. It may feature the same characters in vaguely familiar situations, but it’s otherwise nothing like the source material. It begs the question of why the studio purchased the rights in the first place. I wouldn’t be so damn precious if they’d manage to salvage a decent movie out of such a loose interpretation. I won’t be holding my breath for the sequel.