Fight ClubThe Sixth SenseThe Usual SuspectsPrimal FearBasic InstinctWhat do these films have in common? They were all ripped off by Secret Window…

Not often do I see films I think are going to be supernatural thrillers. I went along as a close mate invited me on a cold Melbourne Saturday afternoon, and I thought it might be fun. But I was expecting to be scared, and to have to turn away my eyes at some points. Unfortunately, the trailer completely misrepresents this ‘thriller’, and makes the film more likely to succeed than it really should be. Apart from blatantly ripping off a slew of recent high profile Hollywood hits, there isn’t much else on offer here. The cast is great – Johnny Depp is pretty good here, and Charles Dutton, although underutilised, is one of my favourite actors. Maria Bello has something about her, and what can I say about John Turturro? He is just super, and at times he steals this film from his extremely well-regarded lead co-star. His entrance is superb, and I wouldn’t be surprised to hear that his first line became a much quoted quote, asked at trivia nights for all eternity. His delivery is just that good.

The plot is kinda shaky, and seems a little disjointed to me – a bit in two halves. The ‘twists’ are about as twisty as a not-twisty, straight-cut, untwistable, twist-less thing. I saw this film coming from a mile away. The frights? Well, I’m a wuss, as previously disclosed, and I wasn’t scared at any stage. The tired techniques of age-old masters of the genre are well-(ab)used, and seem to have come from ‘Thrillers 101’ at the local community college.

It looks good. That’s about all there is to say for it. A shame really, as Depp’s ‘Pirates’ performance brought him long-overdue accolades, and to follow it with this smacks of a poor choice. If you were really bored one night, and in the video shop, and Secret Window was on half-price rental, consider renting it. But make sure you take it back on time – you don’t want to get caught paying more than a few bucks to watch this.

Yes, I have a soft spot for thrillers, but that still doesn’t account for the extreme nature of my disagreement with Mark (and most of the other reviews I’ve read for Secret Window).

I thought Secret Window was a well crafter thriller. No, it didn’t show us anything new, but some great performances and a good script entertained me thoroughly for the duration. (You notice I tend to use longer words when I’m vehemently disagreeing with Mark? I guess I think it makes me look sophisticated, rather than simply saying he has no idea what he’s talking about… He liked Godzilla… I hope you all realise and remember this each time he disagrees with me. He even owns it). 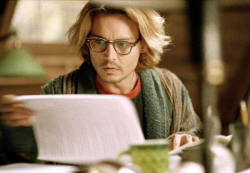 With regards to Depp’s choice of film, I’ve noticed that he does have a soft spot for thrillers. His most generic film choices often include stories in this genre, (for example The Ninth Gate and Nick Of Time).

Clearly the Hollywood machine is running out of Stephen King adaptations, and his better books have already been done (strangely enough apart from ‘Gerald’s Game’ – in my opinion his best novel which I think could be a superb film).

The main thing that stopped many people from enjoying this film, I think, is whether or not they found the plot to be predictable. I didn’t. In fact I figured things out at about the speed the movie makers wanted me to. This I think will ultimately affect your opinion of Secret Window.

In defence of the above paragraph I’d like to point out that I am quite film savvy. (I knew who Jack the Ripper was the moment the actor walked on screen in From Hell.) I think I was simply so wrapped up in Secret Window that I wasn’t doing any guessing.

I loved it. And in fact I bought ‘Four Past Midnight’ (the collection of short stories by King which also includes *shudder* ‘The Langoliers’) and shall be reading it very soon.