I had a lot of fun watching this movie.

But I imagine that for the average viewer a lot would depend on what they think of Mr Black. Whilst some might call him self indulgent, I think he’s hilarious. 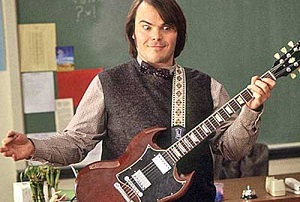 Black’s performances in smaller roles have been fantastic (High Fidelity springs to mind, even The Jackal… does anyone remember him in JFK? I do…), although his first lead role in Shallow Hal left a little to be desired. It seemed his usual manic self had to make sacrifices in order to be the straight man (leaving Jason Alexander and his hairpiece to take on the comic relief).

In School Of Rock, however, Jack Black makes no concessions about his performance. He is loving every minute of it. And that’s what makes this movie so good. This movie could not have been made without him. It would have been like Being John Malkovich without Malkovich.

The supporting actors are all fine, and seem to know that they should give Black a wide berth (in terms of performance I mean, not physical location… I’m not that rude!). I can never decide whether I like Joan Cusack’s performances or not. She is so completely unselfconscious, and at times I’m just embarrassed (for example In & Out), but I think she was fine in this film. She certainly seems more likely to flourish in environments provided for her by her brother (her performances in High Fidelity and Grosse Pointe Blank were perfect).

The story here is full of holes – in fact at times it seems that the film is set on another planet, so ridiculous are the situations. But if you have a well serviced suspension of disbelief, and like Jack Black, then this movie is for you.

The School Of Rock