The gruesome antics of Jigsaw and his protégé should have been taken to the next level in Saw III, but unfortunately this sequel fails to impress the way the first two Saws did. 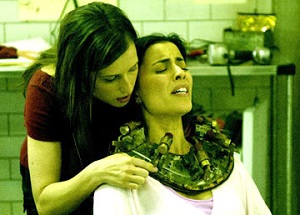 We’ve come a long way since two guys woke up chained in a rundown bathroom with nothing but a couple of rusty saws at their disposal. Admittedly it’s only been two years since then, but Whannell and Wan’s creation is the movie that keeps on giving. They deserve props for providing us with one of the better horror sequels out there with Saw II – it was never going to come close to the original premise, but did feature some nifty sequences and a nice twisty storyline. Saw III ties the franchise into an increasingly messier knot as it adds layer upon layer to the original mythology.

Unfortunately this film has nothing new to offer the series. The torture devices are rather poor (they seem to have run out of ideas), and the narrative can’t seem to decide which of the two storylines to focus on. The better strand concerns Jigsaw, Amanda and their new victim, and this half of the film showed a lot of promise. The second strand featuring Angus Macfadyen as the unlucky/vengeful Jeff is less than impressive, mainly due to the fact that we simply don’t care about him. Now, the second film didn’t really have any memorable characters with which to sympathise, but at least had the clever plotting to keep us entertained. Saw III has none of these, and its conclusion simply doesn’t stand up against the first two films’. In fact there are several rather obvious (and probably other, more subtle) story elements left unexplained, which I’m sure will be dealt with in next year’s Saw IV (it’s become somewhat of an annual event, really…). Whilst it’s nice to know they’re thinking ahead, such loose ends shouldn’t come at the expense of the current film, rather should stand on its own as a good piece of entertainment. There’s a fine line between leaving the audience with something to talk about, and simply frustrating the hell out of them.

Once again a fair share of the shock value is thanks to the sound designer who incessantly bombards us with ultra-loud sound effects. That gritty hyper-edited visual style is still here, also. Tobin Bell once again brings Jigsaw to life brilliantly, and I can’t remember any bad guy who was quite so incapacitated yet caused so much misery. Shawnee Smith was really only chosen for her small role in the original Saw, and consequently never seems quite as convincingly unhinged as Amanda should be. Bahar Soomekh’s character is a little weak also – it would have been better, or at least more interesting had her character had a little grit. The same goes for Mcfadyen’s Jeff.

Saw III stretches the original rules of the game almost to breaking point, committing deeds Scream 3 warned us about with sequels of sequels. I’d like to think that number four will redeem the franchise, but I somehow doubt that will happen.