This is one of those films that thinks it’s a lot cleverer than it actually is. Apparently the creators were aiming for a Hitchcockian feel (although I felt nothing of the sort). 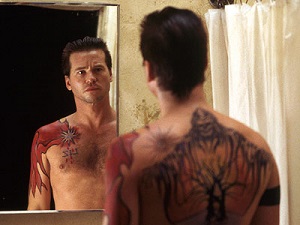 The Salton Sea is imbued with twists that they obviously hoped would impress the viewer, although most of the time these don’t resemble pretzels so much as crinkle cut potato chips. You know the ones – you think they’re gonna taste really good, but then they’re so crunchy that they tear at the roof of your mouth and you can’t finish the packet for the pain in your gums. (I’m sorry, sometimes my analogies have a habit of taking over, like Dr Frankenstein’s creation getting loose. Crap. I just used an analogy in order to apologise for my analogy, didn’t I? That’s like using my right hand to write on the back of my right hand…)

Does anyone remember when people thought Val Kilmer guaranteed a good movie? What’s happened to him? He seems to pop up in the most unlikely of places nowadays, doing very little in average films.

The Salton Sea did include Vincent D’Onofrio, however, and he is a marvel to watch as always (in fact it was his name in the credits on the back cover that prompted me to hire the DVD). Honestly, this man is so talented. Ever since he uttered the words ‘full metal jacket’ with that evil, deranged grin, he has treated us to terrific performance after terrific performance.

I should also mention Peter Sarsgaard, an actor that I don’t remember ever having seen before. His moments in The Salton Sea are truly fantastic, and one particular scene features one of the greatest moments of dialogue I have ever seen on screen (he and Kilmer are driving in a car and share a few sentences… hopefully you’ll know it when you see it). This was obviously a great piece of writing, and, in conjunction with D’Onofrio’s scenes is one of the few great moments in this film.

The use of colour in this film is worthy of a mention also. Whilst this film can be categorised as cinema noir, there are the occasional splashes of vibrant colour that makes this film stand out from all the gritty murder dramas out there. To see bright pink or blue in the midst of all the grimy dark sets makes for an interesting frame.