Sahara is the film that the money-men behind it hope will lead to a new franchise – Clive Cussler’s Dirk Pitt and Al Giordino in adventures all over the globe, saving us from crooked corporations, evil megalomaniacs and such. Whether it works out is yet to be seen, but this is an adequate start. Adequate? Yes, there is nothing that’s bad about this film – the acting, direction, action sequences and cinematography are all fine – but there is nothing outstanding either. Disappointingly, Sahara drags a little at times, one of the only real flaws as such, but what stops it from being a great movie is the plot. As much as I enjoy reading Cussler’s books, they are pretty much standard fare, and this movie adaptation is no different. The outcome is known from the outset, not in itself a disaster, but when every step along the way is easily predicted, you don’t even enjoy the ride.

McConaughey and Zahn, although younger than I had imagined Pitt and Giordino to be, have the right banter to successfully amuse the most critical audience. They smirk and smart crack their way across the world, winning women and battles with the same seat-of-their-pants heroism. If only their exploits were something we haven’t already seen so many times before.

Macy as Sandecker, (again, not quite what I had imagined), works, but I really hope Cruz won’t be back in any more films in this series. Her WHO research doctor is wooden and unrealisticly naïve. There has been talk this is her best English-language role, which certainly makes me less likely to see any of her other work.

The settings in Sahara are spectacular – sweeping sand dunes, yachts speeding along rivers, pristine beaches and blue water. Thankfully, the cinematography is straight down the line, allowing us to really see the beauty of the region.

Apart from its pace, which is slightly off, there is much fun to be had. Although not earth-shatteringly original, Sahara is often exciting and amusing, and is a reasonable conversion of the source novel. Hopefully enough money is made to encourage another in Cussler’s series of Dirk Pitt novels, as I think I could get used to McConaughey, Zahn and Macy together.

Mmm, yes. Lots of fun. I’m not quite sure why Sahara has received so many bad reviews. Sure, there’s absolutely no character development, and nothing particularly original, but everybody seems to be having fun, and such high spirits are contagious.

I’ve never had a problem with Matthew McConaughey, and he does a great job as Dirk. Steve Zahn has delivered much funnier performances in his time, but I suppose he didn’t have that much to work with here. The best part about his character Al is that he can actually look after himself. An ex-navy SEAL as well, Al isn’t merely confined to comic relief duties. With regards to the heroine, I agree with Mark – Cruz sucks. I don’t think I’ve ever been impressed with her performances. 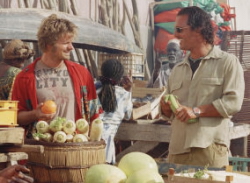 I’m surprised Mark made no mention of the opening scene. The action in the pre-credit sequence comprised dizzying and disorienting cinematography, teeming with quick edits and seemingly random shots. Why Mark would complain about Maria Full of Grace (María llena eres de gracia) and not Sahara, is anybody’s guess.

At times I feared that Sahara would travel into James Bond territory, and it certainly kept threatening to do so. Even the music at times came close to the Bond theme, with trumpets blaring. I hope any future sequels stay well and truly away from this tendency, as we’ve already been subjected to over 40 years of Bond, and surely everybody’s just about sick of him by now?

It’s quite silly how blatantly the studio is pushing for a new franchise here. In fact the credits state that this is ‘A Dirk Pitt Adventure’ right before the title comes up. Well, power to them, and there’s an overabundance of Pitt novels out there to be adapted. There’s certainly a potential for a sequel better than the original.

During most of Sahara I was actually thinking about Matthew Reilly’s books. When are we going to see an adaptation of ‘Contest’, or ‘Ice Station’? Sure, Cussler’s been around a lot longer, so it’s only fair that he get to go first, but I think it’s about time we saw one of Reilly’s books on the big screen, especially since I keep reading about how he has sold the film rights.