Although this film is entertaining in parts, the lack of direction and bloated screenplay diminish what could have been.

S.W.A.T. is based on the 70s tv show of the same name, and uses the theme song and character names of the series, as well as referencing the tv show within the script itself. Whilst I’m not totally against tv show remakes, you have to wonder about the desire to remake almost everything that graced the small screen back then. If it wasn’t good enough for a film then, why should it be now? I guess the nostalgia factor is important, but perhaps an original idea or three might come if a little thought is undertaken in Hollywood. (Eternal Sunshine of the Spotless Mind is an excellent example of original film-making and ideas).

That being said, this is enjoyable enough for what it is. I guess the action is interesting, and the camera work makes the set-pieces seem like documentary footage, which is a nice touch. There is much too much filler though, between the action pieces, and most of the audience must lose patience after a while. I certainly did, and just wished they’d get on with shooting some bad guys and rescuing some hostages… wasn’t that the point?

Farrell is good as always, and Jackson amusing as the old dog of the squad. The minor cast members are less interesting in their portrayals, and whilst there are occasional glimpses of what being a S.W.A.T. member is like, these are mainly blocked out by muscle tops and bad comedy. Rodriguez could perhaps have made more of her family conflicts with S.W.A.T. responsibilities, were she allowed to. In fact, more of the darker side to being such a special operative, and then lots more action, with much less of the petty politics, would have made this potentially a good film. The directing here really lets this film down.

As it is, this is not a good film, but if one is bored and has nothing better to watch, it would pass the time. Fun at times, boring at others, this certainly won’t sustain your interest for very long. (And 117 minutes is very long in this case).

I have to agree with Mark with regards to this film. But I should point out that Mark has paid to see this film twice. (He’s a very silly man. He needs a t-shirt that says “I am a silly man”. Then everyone would be prepared.) There’s no way I’d watch this again.

This is one of those action films without any action. Really. In fact, on the several occasions when a big action scene seemed to be a possibility they left it up to the audience to infer as to what happens, rather than actually showing us. The final fight scene is a prime example: WE SEE NOTHING. I’m not just talking about some long shots designed to hide the stuntmen… WE SEE NOTHING. Not only is the scene filled with heaps of disorienting cuts, it’s played out almost completely in shadow, and the camera spends all its time jumping from extreme close ups to long shots. We really see nothing. In fact at one stage I wondered if they were vying for a more inclusive rating. There’s apparently a fairly nasty stabbing yet we never see it. In fact we barely see the knife. Throughout the few actions scenes I found myself having guess at what had happened. 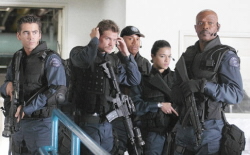 I have decided that the filmmakers spent most of their time making this film with one hand (yes, even the grip). It’s a huge wank. The characters are filled to the brim with attitude yet they don’t deliver anything impressive, either in the action or the script department.

I disagree with Mark, I thought Farrell sucked. I don’t know why this boy is spending all his time with such mainstream movies. I admit I haven’t seen that much of him, but really S.W.A.T, The Recruit and Daredevil were all fairly poor products of the Hollywood machine.

It’s another story with Samuel L. Jackson. He can make any shit line sound good. He has some atrocious lines to say in S.W.A.T, yet he still manages to stay cool. (He was up there with Christopher Lee and Yoda in Attack Of The Clones… it didn’t matter if it was George Lucas Dialogue TM, they delivered it with style.)

The only thing that S.W.A.T. had going for it was potential. This movie was great in the potential department – I think that’s sort of like David Bowie making money on the basis of his future earnings. The premise was interesting, the line up of characters was interesting, but it failed to deliver on most points. It spent too much time frigging around at the start (setting up for things to come which came as no surprise) and by the time the credits rolled I realised belatedly that I had already seen the big action finale… Except I hadn’t.
Review by Stuart Wilson