Geez! John Grisham doesn’t even need to work hard to get lotsa big movie stars to be in adaptations of his books. So many big name stars! The cover of Runaway Jury sort of looks like the Lethal Weapon 4 poster… there’s simply too many faces there.

I get the feeling that having the film rights to John Grisham books is like having a license to print money. It seems to guarantee a crowd pleaser (even if the films have a few moments that challenge our expectations, for instance The Chamber).

So… there is now a sub-genre of film known as the John Grisham Legal Thriller™. That in itself isn’t so bad… he certainly knows his stuff. 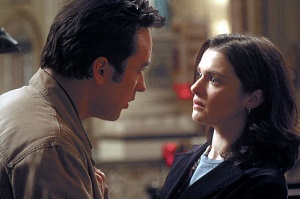 Runaway Jury is a satisfactory use of two hours. There’s nothing in there to challenge, nothing to surprise, and nothing to leave you pondering afterwards. The performances are all of a great standard, but then again that’s what you get when you put John Cusack, Gene Hackman and Dustin Hoffman in a room together. Special mention should be made of Rachel Weisz… whose performance is exceptional. She manages to breathe life into her character, and in fact surpasses some of her elders in being able to make the most of a dynamic role. I hope she gets some challenging roles and the recognition that she deserves sometime soon.

Also, Leland Orser is here, and I can’t go past a Leland Orser film. He’s just so cool, and yet he never gets the lead character. In case you don’t know who he is, he’s the guy that was forced to do something horrible to a prostitute in Se7en. Ah, yes… now you remember, don’t you? How could we forget?

Like most of Grisham’s films (I haven’t actually read any of the books) the plot is not nearly so clever as he thinks it is, but overall the film works fine. Events are generally over quickly, and there are almost no quiet moments in this film. The pacing seems to be the key to a good legal thriller.

Now the question is: what does Mark think of this film? (Especially considering that 12 Angry Men is one of his top ten films.)