Actor Richard Roxburgh’s directorial debut, Romulus is a quintessentially Australian tale based on the memoir by Raimond Gaita. About halfway through the film I caught myself thinking ‘gee, this is really sad’, and then I remembered that every Australian book on my high school syllabus (fiction or memoir) was depressing. 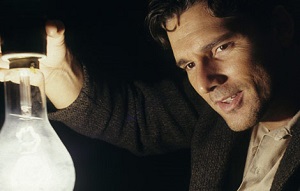 I’m not quite sure why that generalisation seems to ring true, but so many Aussie books are horridly bleak, and it seems Romulus, My Father is no exception. The story of a family of German migrants told through the eyes of young Raimond, Bana plays the titular character, struggling to raise his son effectively on his own, with the occasional input of his friend Hora (Marton Csokas). His wife Christina is a bit of an enigma, appearing and disappearing at irregular intervals, flighty and clearly depressed before the clinical term had become general knowledge. She’s played wonderfully by Franka Potente, and is a truly fascinating character. To see her lovingly attending to Raimond at one point and later staring blankly into the distance as her baby screeches in her arms is a captivating contradiction. Bana is very strong in this film, even if we never get the insight into his character that we so crave. Since his rise to fame he’s been in so many dud films that it’s good to be reminded that this is the same man that put in extraordinary performances in Chopper and Munich. It was also nice to see Marton Csokas not playing the bad guy (like he did in The Bourne Supremacy, Garage Days and xXx).

The real revelation is young Kodi Smit-McPhee, and it seems that every year there’s one or two astounding child actors discovered. He actually has the toughest job of holding the film together.

Geoffrey Simpson’s cinematography is beautiful from the very first frame. The music by Basil Hogios is occasionally over the top, and in one or two spots a bit distracting.

It’s been a quiet year for Aussie cinema, and Romulus, My Father is a strong if not stunning feature. The film’s not quite as emotionally affecting as is should be, and I always felt like an observer when I should have been drawn in. It’s a solid film that takes no risks and as such calmly achieves what it sets out to do.

←Pirates of the Caribbean: At World's End Hostel: Part II→