With the voices of many of Hollywood’s biggest stars and a colour palette so rich as to inspire the non-artist like me, Robots could have been a wonderful example of what animation can be. Unfortunately, it is let down by a seeming lack of interest in story or character development.

Yes, it’s a children’s movie, but so many people have said “oh, but if you’re an adult there’s stuff in there for you too!” that I had false expectations. Buoyed by the wonderful Toy Story 1 & 2, and also Monsters, Inc. and the first Shrek movie, I hoped for more from my Saturday night movie. I wanted excitement, and tears, and a basic sense of who these characters were, but I got none of that. Instead, I was served worn-out old fare, with no new ideas or flourishes, presented well enough to fool anyone who didn’t look deeper.

The animation is extraordinary – Robot City is a wondrous place of whizzing gadgets and whirring machines, that will surely appeal to anyone under the age of ten. With bright colours, a lot of fast movement and sudden stops, the adventures of the residents are brilliantly brought to life. The entry of our hero, young Rodney Copperbottom (Ewan McGregor), may well be the best sequence in the film, with reference to all my childhood toys and the soundtrack of Robin Williams babbling along at his usual rate.

Unfortunately, what robots lack – and this film suffers from the same unfortunate malady – is a soul. While the bright flashing colours will keep infants entertained, the trite ‘story’ and its obvious outcomes is an insult to most film-goers’ intelligence. Sure, it’s a kids movie, but even kids deserve more than this. If only a percentage point more of the US$75 million budget had been directed to basic character development and story outline, this may well have been more successful.

As it stands, Robots is entertaining for those adults on drugs who just want to see colours and flashing lights and not have to think, and for younger children not old enough to know they’re being shortchanged.

Is anyone sick of CGI animated kids’ films? I am.

From the very start Pixar was the leader in kids’ animation. They have consistently produced films with great scripts, entertaining for people of all ages. Sure, there were occasional lulls: A Bug’s Life and Finding Nemo are nowhere near as memorable as Toy Story or The Incredibles, but their films have been the best of the CGI epidmemic. 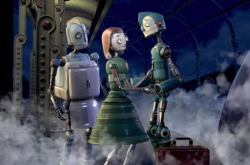 Ice Age was, I think, an all time low for the genre. And now I find out that Ice Age 2 is due next year. Sigh.

So how does Robots hold up? Well, it certainly looks stunning. The animation is brilliant, wonderfully rendered. But this is actually detrimental to the film. At times I found it hard to focus on the action because the entire screen was filled with colour. The Incredibles cleverly kept the animation relatively cartoon-like and plain, relying on character to keep the film interesting.

As opposed to Monsters Inc. or Toy Story, which were at times hilarious, Robots had me chuckle several times at most. And to tell you the truth it was more of a ‘I’m laughing to let others know I get the joke’ rather than from any genuine amusement.

The voice actors do a fine job, and as usual I spent a lot of time trying to figure out who each of the voices belonged to, a frustrating and typical past time when it comes to animation.

From now on I think I’m gonna hold back on the animation front. Only when a film gets unanimous approval will I venture into the cinema or hire the DVD. I saw Shark Tale recently, too, and that was just as boring.
Review by Stuart Wilson