Similar to Terrence Malick’s The New World but thankfully a little more accessible, River Queen is another beautiful film from Vincent Ward that doesn’t quite hit the mark. 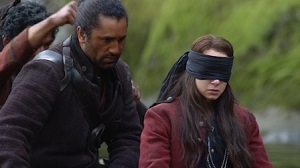 Ward’s directorial history isn’t without complications: after the fantastic and eerie The Navigator: A Medieval Odyssey, he would have made a brilliant Alien³ had the film execs had any sense, and after Map of the Human Heart he directed the big budget What Dreams May Come, a mammoth (and expensive) undertaking that received its fair share of scathing reviews. River Queen is the first film he’s directed since 1998 and he was apparently removed from production by the producers (cinematographer Alun Bollinger took over), to return to the helm once filming was completed.

Typically for a Ward feature, River Queen is visually stunning. The movie-going public is quickly discovering that New Zealand must simply be the most beautiful country on the planet, thanks to the number of film productions produced there. With River Queen the image of a tiny lopsided steamboat chugging its way along the river surrounded by the untameable wilderness will remain in my mind for a long time. The CGI effects are used only sparingly, and perfectly complement the actual locations.

Samantha Morton plays Sarah O’Brien, an Irish woman amongst the English and Maori in 1860s New Zealand. The blurring between the two cultures is intensified not only because of indigenous peoples fighting on both sides, but because Sarah had a child with one of the Maoris. The clash of cultures is impressively handled, and the motivations of each are rather simplistic in comparison to Sarah’s predicament. Kiefer Sutherland is a surprising face amongst the cast, and it’s good to see him outside TV’s ’24’ (it looks as if he won’t exactly be challenged by The Sentinel) even if his Irish accent is rather extreme. Cliff Curtis suits his role admirably but is nothing special, whilst Temuera Morrison is wonderfully fearsome as the tribe’s leader.

The main problem with River Queen is that it’s hard to feel for these characters, as we’re often held at arm’s length thanks to the excessive voiceover that keeps interrupting the action. The montage that makes up the first section of the film feels awkward also (and is in fact similar to The New World – it feels as if it had been cut down). Overall it is a decent film, though nowhere near as powerful as it could have been.