With splendid visuals and stunning special effects, it’s a pity the rest of Renaissance is so disappointing. Christian Volckman’s film unfortunately manages to be reminiscent of every big name science fiction movie ever released, yet offers nothing new to the genre. 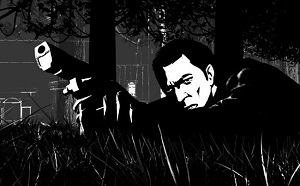 There’s no doubt that the visual style will be compared with the green screen extravaganza Sin City, but Renaissance goes further by actually ‘drawing’ over the characters themselves, much like Waking Life or the upcoming A Scanner Darkly. Whilst Daniel Craig (Munich), Ian Holm (Lord of War) and Catherine McCormack (A Sound of Thunder) provide their voices, the figures are stark, two-dimensional black and white, with no grey tones to provide depth. Such a technique gives the film an almost comic book feel, and it’s eerie seeing such realistic movement from the highly stylised characters. Like many futuristic visions, the Paris of the future features a mix of high-tech and gothic architecture, and there’s no denying the film features some unique imagery.

Most impressive is the fact that the filmmakers have taken advantage of their predominantly digital sets, as the ‘camera’ zooms around this futuristic world in a way that could never be achieved through traditional filmmaking. This is one aspect of Renaissance that doesn’t disappoint. There are several great action sequences and the car chase is fantastic.

When it comes to an engaging plot, however, the film falls flat. Highly derivative, Renaissance manages to touch on all the obvious sci-fi bases before heading towards a rather banal conclusion. There are more than a couple of references to Blade Runner and pretty soon any sci-fi buff is bound to be bored out of their minds, desperate for something a little different. It’s almost as if the 25 years since Ridley Scott’s film never happened. The dialogue is fairly poor also, and at times elicited groans from the audience.

As a work of art Renaissance is stunning, but as a legitimate science fiction movie it fails tragically.

←The Omen Over the Hedge→