Post Academy Award-winning Hilary Swank isn’t quite as bad at choosing films than Halle Berry, but she comes close. 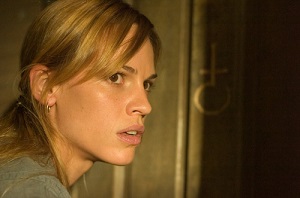 To be honest, The Reaping isn’t quite as bad as I’d been lead to believe. As a fairly generic supernatural fire and brimstone thriller it does ok. Katherine Winter (Swank) and her offsider Ben (Idris Elba) are called in to investigate a series of strange occurrences in the backwater town of Haven. Of course they’re not experiencing something simple like a weeping statue or the image on Jesus on toasted cheese, but rather a series of biblical (read: CGI) plagues.

It’s the special effects that hamper a lot of this film. There’s simply too much CGI, and it looks crap. The sometimes elaborate set pieces are conceptually okay but it seems the budget simply wasn’t big enough for what they had in mind.

The script does a pretty good job of filling in Katherine’s personal demons. Like many horror film characters, she has lost her faith/cut herself off from the world because of a tragedy that occurred in her past, and the writers manage to intertwine her personal horrors with the more blatant plagues. But they let themselves down with the latter. Why are so many religiously-themed apocalyptic thrillers so bad? End of Days, Bless the Child, The Omen remake… they have a veritable gold mine of mythology from which to plunder but somehow they end up falling short. The best I can guess is that the Old Testament is simply too silly. These days it’s too hard to validate the eye for an eye/vengeance kinda gig at face value without any kind of sophisticated analysis of the concepts. You can imagine the screenwriters scanning through Exodus and underlining the words ‘boils’ and ‘fiery hailstorm’ and then having a break, considering it a job well done. If they had tried to make this vengeance from the heavens actually relevant to something, anything, then it would have been more interesting.

To her credit Swank goes about taking the film seriously, as does a buffed up Idris Elba (from TV’s ‘Ultraviolet) though the movie does him no credit. Stephen Rea also appears in a completely unnecessary small role, maybe just so the narrative has something to cut back to every now and again. It’s the last 15 minutes or so of The Reaping that get really silly. If you’re after a reasonably mindless supernatural thriller with cheap scares, then The Reaping will suffice, just don’t expect anything special.