Shot digitally and on a meagre budget, Rats and Cats is a laidback comedy that demands a fair bit of patience. 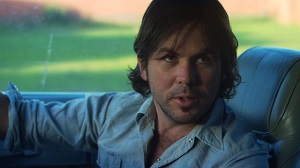 Journalist Ben is given the job of tracking down Darren McWarren for a ‘where are they now?’ piece. At the height of his career, Darren was a household name, a soapie star who’d made a handful of TV movies. After self-destructing he now lives in a small town somewhere in Victoria, and is a bit of a hero to the locals.

This film has a really small focus and is driven by the superb performances across the board. The humour is subtle, and more than a little black. Writer/actors Gann and Zwar could have gone for a more straightforward comedy in, say, the vein of The Castle, but instead opt for thoughtful character-based humour. As a consequence, this film isn’t for everyone. The pacing is laidback (some would say sluggish), and there aren’t too many revelations to be had overall.

Zwar is fantastic as the diligent reporter who forever seems mildly confused by the eccentric burnout. Comparisons to Russell Crowe would be fair when it comes Gann’s performance as Darren, though his is a sincere performance rather than an outright pisstake. Some of the ex-soapie star’s backstory is a little confusing owing to the fact that everyone talks around the issue. An air of mystery also surrounds Darren’s ‘friend’ Cindy (played perfectly by Anya Beyersdorf), and she perhaps could have done with a little more backstory. Finally, Paul Denny is sublime as Darren’s manservant Bruce, providing some of the film’s funniest moments.

Though I appreciated the slightly more refined scripting of Rats and Cats, it would have been nice if the film had been a little more accessible and featured more outright humour. The cinematography is beautiful, and this is a good example of digital filmmaking done well. The score is strangely unsettling, and I couldn’t decide if it was merely inappropriate or perfectly off-kilter.

A solid film, though with narrow appeal, Rats and Cats could well develop a bit of a cult following.