Yes, comparisons between Raising Victor Vargas and Kids are almost unavoidable. The film is about kids a similar age to those in Larry Clark’s masterpiece, and one could be forgiven for thinking that exactly the same streets featured in both films. It has been said that RVV is in fact a nice version of Kids. (The latter I’m sure convinced a generation of underage children who saw the film illegally that sex was something disgusting and horrible.) To a certain extent this is true, and Raising Victor Vargas is Kids Lite* (*with less than three percent calories!).

The kids in this film at least seem to display a conscience, and seem concerned with the wellbeing of their family. There is an enduring ‘aww!’-ness to the film which leaves one in a much happier mood than Kids. 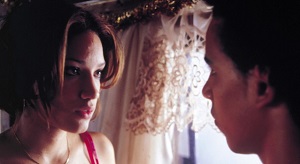 The acting by the kids is fantastic, in fact I’ve seen so many talented young actors recently that I’ve begun to wonder if adults simply aren’t cut our for the job at all (something to do with wisdom coming with age but impeding truth – who knows…). Their performances are so perfect that it’s impossible to imagine any viewers not caring about their plight.

The ‘plight’ itself bothered me. I just thought the grandma/guardian was simply stupid, and thus spent most of the film being angry. It didn’t seem to be related to any particular generational/ethnic gap, but rather that she was a stubborn, selfish and stupid old cow. This made it hard for me to relate to some of the problems faced by Victor, since they seemed so ridiculous.

Judy Marte is an absolute stunner. If her agent plays their cards right she could have a huge career ahead of her. But I would have liked to have seen more background to her character. I didn’t quite understand why she acted the way she did.

This is a sweet film that amuses and entertains, without ever getting too full-on or challenging. The fantastic work done by the young cast gives the film most of its 3 points.