Having the chance to see the ultimate fan movie was certainly a rare treat. For those who don’t already know the story, as originally broken by the likes of Harry Knowles and Eli Roth, from the years 1982 to 1988 Eric Zala, Jayson Lamb and Chris Strompolis filmed a full length, almost shot by shot recreation of their favourite movie Raiders of the Lost Ark. 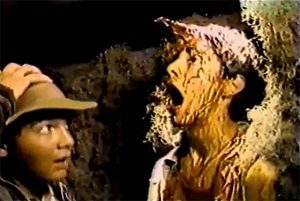 The end product, and its subsequent rediscovery after almost 15 years on the shelf gathering dust, is a revelation. If you ever have the chance to see this at a nearby film festival (screenings are limited due to legal issues) then GO AND SEE IT. Especially if you’re an Indiana Jones fan, and even more importantly if you’re an amateur filmmaker. This is a labour of love that for me was more inspiring than any ‘proper’ film I’ve seen in years.

Raiders of the Lost Ark is astounding for several reasons. First of all: the perseverance. That three boys, from the age of 11, would spend seven or eight years of their lives making one film is incredible. As an amateur filmmaker I have slaved away for many, many hours on films, but nothing compares to what these guys went through in the 80s. Take a moment to think how resourceful these lads were. Not only was non-linear computer editing a distant dream, but video copies of the film weren’t even available to them. They filmed a lot of this from their memory of the original feature. With just a Betamax camera.

Okay, so the phrase ‘lunacy’ comes to mind at this point. But that’s what’s so amazing about the Raiders experience. Their dedication was unparalleled. It was crazy, but they did it.

The sobering aspect of their rise to fame is that it almost never happened. This fact alone is a wake up call to all potential filmmakers out there. If three resourceful and dedicated 11 year olds can spend a decade of their lives making a film, you’d think they had the right stuff to make it in the industry. But they didn’t make it. They ended up sidling into careers on the periphery of filmmaking – computer games, producing DVDs. It took a chance viewing by Eli Roth (director of Cabin Fever), who himself had only recently become famous, to eventually get the attention of Mr Spielberg himself, and get the Raiders their subsequent fame.

My best wishes are with the Raiders and I sincerely hope that they fulfil their dreams and make their own movies. They, if anyone, deserve a chance to make it on the big screen. If they don’t then I’d be prepared to hang up my hat and give up on whole watching/discussing/making movies. This is the movie experience in its entirety – the viewing, the passion, the creation. But I reckon they’ve already completed their greatest achievement. I’d be amazed if such a project is ever successfully replicated in the future. To remake an entire film (indeed Hollywood blockbuster) shot by shot, with only home equipment, a rudimentary knowledge of the craft, and your friends and neighbours for actors and crew is an extraordinary feat.

What is there left to say but thank you? Thank you to Zala, Lamb and Strompolis (and the entire cast and crew) for showing me how much can be done with so little, and to Strompolis particularly for coming out to talk about his film. Thank you to Steven Spielberg for a: inspiring them, and b: not suing the pants off them. And thank you to Popcorn Taxi for showing Raiders of the Lost Ark: The Adaptation.

As a friend of mine commented after the screening, ‘how much better was this than Gus van Sant’s remake of Psycho?!’ Exactly.

PS: it’s impossible to rate this film in the standard manner. Just please promise me you’ll go and see it if you get the chance.

Raiders of the Lost Ark: The Adaptation