Whilst The Punisher is a refreshingly bleak change after the raft of comic book adaptations that are all shiny and bright, the lack of charisma of the leading men means it failed to capture my interest. Yes, The Punisher is bleak. Bleak in plot, bleak in appearance, bleak in resolution. This could have worked, if only one had cared for the hero a little more, and I just didn’t. Tom Jane tries hard to be a nice guy, but fails completely – in fact the only time he really succeeds in this film is when he’s causing mayhem. His relationship with his wife and son is supposed to be moving and thus their loss more affecting, but I just didn’t care that much.

Where The Punisher does work is in action scenes. The gunplay and explosions are enjoyable, and Jane is an effective action hero. Travolta redoes his ‘psychopath bad guy’ role from Swordfish, Pulp Fiction, Broken Arrow et al, and seems only in second gear. This must have seemed like easy money for him, having played this role so many times before, and he really seems only half interested.

Do bullet-proof vests have side protection? I had thought they were predominantly front and back, but I’m not trained in this area. Whatever, Jane takes an enormous beating on several occasions, and stays standing. I wasn’t at all convinced, but if we’re in comic book land I guess we need to accept comic book rules.

The only really enjoyable sections of this are the revenge sections – the parts without bullets and punches – where Jane gets back at Travolta by using his wife and best friend. Wicked and fun.

The Punisher is an adequate film, but lacks on several fronts. Had the two male leads been more empathic, this cold have been a great dual, but instead it stays firmly in the middle of the road.

I agree with Mark for the most part – this is a very average film.

Technically, this film is great. I loved the cinematography, the fight choreography, the stunts and the editing. In that regard The Punisher is a very well made film. The story, however, is just too simplistic for my liking. 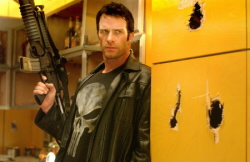 It is a step up from Daredevil (there was nothing challenging about the hero’s emotional arc in that film), but if The Punisher has been true to its source, then this is simply a very unchallenging comic. As far as I can tell – not having read the Marvel comic – this is simply a cross between Batman and The Phantom.

I was impressed by the darkness of Frank Castle. It is interesting to note that there is nothing particularly likeable about the hero. His vendetta is, to be quite blunt, wrong… his actions reprehensible. But the filmmakers didn’t shy away from this fact. I was curious to note that I abhorred Castle’s actions just as much as the bad guys’.

The lack of ‘good’ in what you would expect to be a showdown between good and evil makes this film a little more interesting.

Tom Jane is not a very charismatic leading man. I didn’t like him in Deep Blue Sea and didn’t really like him here either. Rebecca Romijn-Stamos is back in a supporting role (where she should be, as opposed to Femme Fatale) and she plays one of the three neighbouring misfits well. I’m not entirely sure why Roy Scheider was here, but he does well also.

The music in The Punisher simply didn’t work at all. I was constantly distracted by the score. It had some good tunes, but it never seemed appropriate.

I haven’t seen the original Dolph Lundgren film, but I’m sure this one is better.

←Anchorman: The Legend of Ron Burgundy Dawn of the Dead→