I really enjoyed Boogie Nights. I disagreed with everyone else and thought that Magnolia was one big wank. I thought Punch Drunk Love was absolutely awesome.

It’s true, Adam Sandler does put on a fantastic performance in this film, and you must understand that this complement is coming from someone who absolutely loathes Adam Sandler movies. 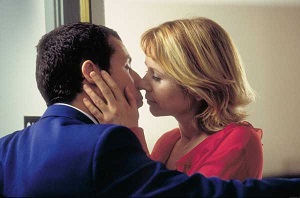 It’s really good that Punch Drunk Love had such a narrow focus, as opposed to Anderson’s previous two films. Essentially there are only two narrative strands in this film, but they are so mesmerising that it doesn’t need anything more. For the majority of the film I was mentally ‘uncomfortable’. The situations made me squirm, I dreaded what was to come and I wanted to keep yelling at the characters to act differently. Then towards the end of the film I started loving every – and I mean every – single narrative choice that was made.

Luis Guzman’s role was pretty much a big waste of time for all involved (there simply isn’t much for him to do), and it’s fantastic to see Philip Seymour Hoffman in a different role for a change. For once he wasn’t someone that inspired pity and/or revulsion.

I can imagine that this film did nowhere near as well as Boogie Nights or Magnolia, but believe me it’s better than those two put together.

Rarely do I hire a film, and then not finish watching it. I have been known to sit through some utter shite in my time, but I have never left the cinema during a film, and I can’t remember the last time I stopped a video/DVD halfway through. But I did with Punch Drunk Love.

I know PT Anderson loves to make films with characters that are ugly and grotesque. I knew that going into this. I think I stopped it about 30 minutes in, and watched some obscure sport from China in preference. It was that hard to bear.

So, I can’t really give it a rating or a proper review, but as I won’t be wasting any more of my time trying this film again, this is the best I can do. Sue me.