The first thing the discerning viewer has to ignore in regards to this film is the appalling lack of correct grammar being applied to the title. Okay, so there was Mac And Me all those years ago, but the alliteration made such a travesty excusable. And, to be fair, ‘The Prince And I’ was probably a little confusing, as if we were to expect a pubescent Yul Brenner in one of the most gratuitous prequels of all time.

I was fully prepared to ignore all this: but then the last straw: the prince of Denmark using the word diapers in conversation with his parents?!? 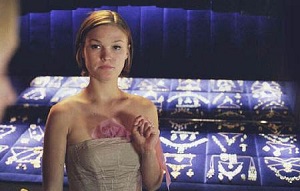 Okay, so this is all pathetic nitpicking, but this is because, quite frankly, I’m angry. I’m angry because the ending of The Prince And Me had one of the most pathetic resolutions of all time. It was such a cop out that it has coloured my opinion of the entire film, which I had found to be an enjoyable piece of fluff up until that moment. Not only is it pathetic, IT DOESN’T MAKE ANY SENSE!

I have seen what I assume to be the original ending in the deleted scenes section of the DVD, and although it isn’t very satisfactory either, it’s much better than the pathetic last 2 minutes that completely negates all the effort the film put into the concepts of responsibility and independence.

Seriously, this is almost as bad as the glass of milk fiasco at the end of Hitchcock’s Suspicion. In fact, if Carey Grant had stepped in and swept Julia Stiles off her feet, it would have made much more sense (in a very homosexual and posthumous fashion).

Eugh! Okay, now that I’ve got that off my chest I’ll try and focus. Stiles does a great job here, but I’m always impressed with her. Luke Mably does well also, although he has such a bland appearance that I can’t actually remember what he looks like.

One of the less noticeable letdowns of this film is the actual look of the thing. The cinematography is entirely uninspiring, and the editing at times amateurish.

The cover somewhat inaccurately tries to make The Prince And Me compete with The Princess Diaries, yet these films aren’t really that similar. Whilst PG here in Australia, I imagine this film would have much more trouble finding a target audience, being too old for kids and too young for older teenagers.

The Prince and Me treads familiar territory with ease, but is so let down by the crappy ending that I could never give it the credit due for the rest of the film.