I’m a big fan of Dominique Swain’s work. From the lightweight yet fun Intern, to nicely dark Tart to the very strange Happy Campers, I’ve always enjoyed her onscreen presence. I haven’t seen the Lolita remake, but I got so bored in the Kubrik version that I’m not really interested in seeing Jeremy Irons lust after her. 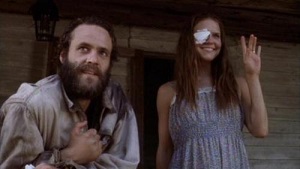 With regards to Plain Dirty, I imagine she jumped at the chance of being in a very morbid and depressing film. So much of this film is ugly. The characters, the motivations, the setting… all of them work well together to present an accomplished film that isn’t very easy to watch.

As always, Swain gives a complete performance, creating a wonderfully believable character. The supporting cast are great also, but there’s something about this film that just didn’t sit right for me.

It may have something to do with the ‘dirty’ nature of the images. This is a purposely ugly film, full of dark browns and harsh white light. The cinematography itself might be pretty, but the images certainly ain’t. The people are just about as ugly as their motivations. Put this up alongside Deliverance and Wrong Turn for negative presentations of the American deep south.

A couple of times this film dragged, and on the whole there isn’t much to recommend from the story, the relevance of which kind of lost me at the end. This is the type of film I might appreciate more had I an interview or audio commentary by the writer and director to view.

Plain Dirty does get the award for Best Scene In The Mud And The Rain, an award taken in previous years by films such as Brotherhood Of The Wolf (Le Pacte Des Loups). (Mark’s gonna want to see this film now that I’ve said that.) The climactic scene certainly looks awesome, I’m just not really sure of the point of Plain Dirty.