I was one of apparently four people worldwide who thought the first Pirates movie was overrated, overlong and lacking in excitement. Excepting the brilliant Johnny Depp, I honestly could see nothing to recommend about that poorly scripted, special effects laden chaotic amusement park ride of a film. 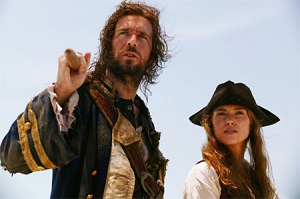 Thankfully Dead Man’s Chest is a little better. A lot better in fact. Though it’s still ridiculously overlong (aren’t all the anticipated big budget outings these days?), there are fewer boring patches and more importantly some fantastic action sequences. Gore Verbinski showed us way back in 1997 that he was a master of physical action comedies with Mousehunt, and it’s good to see that he finally gets to put his skills to use. For all the swashbuckling zest of the first Pirates film, there were no memorable action scenes, whereas Dead Man’s Chest intelligently puts most of its energy into several big set pieces that are thrilling and memorable in their use of cause and effect.

The special effects are surprisingly good, as I was even able to suspend disbelief when it came to Davy Jones and his crew. As is often the case, however, the filmmakers get just a little too ambitious in the last few scenes and bombard us with some awful CGI/green screen moments.

Depp, Bloom and Knightley are all in fine form, and while they spend less time delivering some of the more pathetic lines of the original, there are a few too many reprised jokes (though not as bad as whenever Mike Myers makes a sequel). Naomie Harris and a very wet Stellan Skarsgård are welcome additions to the cast, even if the former’s accent as the mystic Tia Dalma is a little hard to understand. It seems that the film makes use of any character we’ve previously met who isn’t yet dead (and even some that are) thus we have the likes of Jack Davenport reprising roles that aren’t really that necessary. The monkey, on the other hand, is funny.

The plot seems to be moving more and more into fantasy and farther from the basic pirate mythos, and one wonders if this would be the case if The Lord of the Rings hadn’t proved such a success. I for one would like to see some solid fantasy films alongside all the kids’ flicks and comic adaptations currently cramming our screens (maybe ‘Lord Foul’s Bane’, or even ‘Magician’, surely there’s a market out there?).

This is part of the Pirates franchise, and thus still an exercise in excess. The motto seems to be ‘more is more (but let’s add a little more)’, and while the visual overload didn’t bother me as much as it did first time around, Dead Man’s Chest could still have done with some trimming.

Thankfully however, the main attraction – Captain Jack Sparrow – hasn’t jumped the shark yet, and whilst the sequel relies more on physical humour than quips, it’s Depp’s performance that demands the most attention. But when has he ever delivered a poor performance?

It is hard to believe it was back in 2003 when audiences first met the cursed crew of miscreants aboard the Black Pearl, and yet here we are in 2006 with the second in the trilogy of Pirates of the Caribbean films. Disappointingly, however, this instalment is too long winded to maintain the impact of the psychic blow received when Johnny Depp first played Captain Jack Sparrow.

Pirates of the Caribbean: The Curse of the Black Pearl had a wonderful effect on audiences, predominantly due to the stunning performance of Depp – Sparrow was a fresh and interesting leading man, played brilliantly, and he carried the entire frolic. 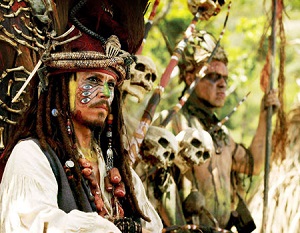 It was not just Depp though, with Orlando Bloom still on the rise and Keira Knightley following on his heels, there was so much fun and excitement about the film, it always seemed hard to differentiate the film from the hype. Yet, Pearl remains an enjoyable ride with much to offer, and one wonders whether the same will be said of Dead Man’s Chest.

Although picking up soon after the ending of its predecessor, Dead Man’s Chest fails to be nearly as exciting or enjoyable, mainly due to flab in the mid section. Only seven minutes longer than Pearl, Chest seems comparatively to take forever to get where it’s going, there are major slabs of inactivity that might be better left for the extras section of the DVD release, and still the audience is left with questions unanswered. Additionally, Pearl was an intact movie, finishing on a high note, yet here there is an added risk taken by leaving audiences with a cliffhanger ending and much unresolved – perhaps this series would succeed irrespective, but this film’s finale is a real downer.

The attention taken to continuity of actors is impressive, with many familiar faces also along for Dead Man’s Chest, and yet some have obscure roles to play that seem almost unnecessary… Jack Davenport’s Commodore Norrington suffers most, with an abrupt change in fortunes and a less than obvious change in motivation. Lee Arenberg (Pintel) and Mackenzie Crook (Ragetti) also seem less amusing as comic relief than before. The addition of Bill Nighy and Stellan Skarsgård, however, is worthwhile, and one wonders whether both will have even more significant roles to play before the saga is complete.

There are exciting moments scattered throughout Dead Man’s Chest, and yet the overwhelming feeling is that this has been done before. Far too long is taken to get the characters to where they need to be, and far too little progress in the story is made to justify its hefty running time. When viewed in combination with the coming third film (as it surely must be, as this story is far from complete), it is likely that twice as long will have been taken to tell a tale of similar complexity as that of the much more successful and entirely self-contained first in the series.