When Seth Rogen’s character Dale Denton is extolling the many virtues of marijuana early in his latest ‘comedy’, one of the listed benefits is that it ‘makes bad movies good’. Perhaps that is the key to appreciating Pineapple Express, although one suspects no amount of drug assistance could save it from its own flaws.

Dale is a Process Server – one of those guys that deliver subpoenas with the line ‘you’ve been served’ – and he is good at his job. With multiple costumes allowing him to infiltrate many different workplaces in order to serve his summons, he also gets time while waiting for his subjects to indulge in his favourite pasttime of getting stoned and then calling talkback radio. When he witnesses a crime while waiting to ‘serve’ a drug lord, Dale sets off a sequence of events that will mean both he and his dealer Saul (James Franco) will be running for their own lives.

Written by box office golden pair Judd Apatow and Rogen, Pineapple Express has ‘hit’ written all over it. Apatow has rarely ‘missed’ in recent years, and Rogen is his star of choice. Disappointingly, then, it seems most of their films are cut with a cookie cutter – man-child/slacker gets himself into trouble but is a good person underneath it all and thus wins the audience over in spite of his behavioural flaws. It would be nice (and almost surprising) to see something else from this pair.

The charm that Rogen showed as the sidekick in The 40 Year Old Virgin is largely absent in much of his work since, and there are no surprises in Pineapple Express. For those that love his overweight, hairy oaf with a smart mouth act, this film may satisfy more than expected, however even his most ardent fans must be hoping for something more in future movies. Franco is adequate as the permanently stoned drug dealer with an interest in civil engineering, although he never really shines. He and Rogen work reasonably well together, although there is no real spark between them, and there simply had to be for the movie to work.

The film moves fairly slowly, with too much time spent in a weighty mid-section of car chases and slapstick before the big action set piece finale. Although there are occasional laughs, much of the comedy rests on the shoulders of drug dealing middle-man Red (Danny R. McBride) whose run of injuries is supposed to lighten proceedings and yet his singular lack of appeal makes this fall flat.

Fans will laugh and non-fans won’t bother seeing it, while the scant few in between will probably decide for themselves rather than listen to critics. If watched at all this is perhaps best left for dvd.

The problem is that Seth Rogen and Judd Apatow have spread themselves too thin. Since The 40 Year Old Virgin three years ago, the two have been involved in at least ten feature films, and that’s not including Rogen’s voice work in animations. Now, I’m happy for their success, but their ubiquity is more than a little frustrating. 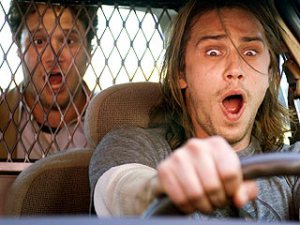 Studios would probably jump at anything they were to offer, and the quality has been lost somewhere along the way.

This is how I imagine it happens: Rogen, Apatow and whoever else involved in the screenwriting process come up with twelve great jokes. Twelve fantastic, show stopping moments. And WHAM! there’s your movie. It matters little that the minutes between those moments are poorly thought out and/or dull, because you can fit quite a few of those jokes into a two minute trailer. To be fair, there are a number of humorous moments that must appear organically during production, and these are obviously nurtured and included in the finished product, but the fact remains that we end up with a very shoddy film.

Pineapple Express is intermittently hilarious. Rogen has proven time and again that he’s great as the lovable slacker, and James DeFranco’s performance is quite frankly astounding. After finding him the most irritatingly squeaky clean face in the Spider-Man franchise, his turn as pot dealer Saul is fantastic.

In theory, this could have been quite a good film, but it feels like a first draft. Scenes drag, the pacing is completely off, and there are a number of redundant moments, none so offensive as the final scene – I can’t think of a lazier way to end a film. That David Gordon Green directed this is a bit of a tragedy, because All the Real Girls was an astoundingly effective and honest film that really impressed.

There is fun to be had, and as Mark says, if you were stoned then maybe it would be worthwhile. Sitting around with a bunch of mates, you could perhaps talk during the flat bits, too, which would work rather well.