You know when a film stars Parker Posey that it’s gonna be an American indie piece, (okay, so just for a moment forget Josie And The Pussycats), and Personal Velocity certainly fits that description. With lots of hand-held, blurred and out of focus shots the cinematographer certainly seems to have aimed for an in-your-face, ‘real’ type of movie.

In the opening credits the words ‘three portraits’ appear, and for a moment this flummoxed both Mark and I. Mark joked that maybe we’d hired the wrong film, and I thought that maybe it was an actor with a particularly strange name. I finally settled on the idea that it might have been the original working title of the film. 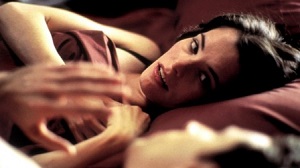 The film certainly is three portraits. Three short films about women in a state of transition. This, however, is about all the three parts have in common. At only one point do the stories overlap (and just for a short moment), and this I felt made it hard to quite decide what these three women had in common. I’m sure this pissed Mark off no-end, and in fact towards the end he was whining because he didn’t ‘see the point’.

All the performances are top-notch, but the camerawork did annoy me after a while. Whilst Peter Greenaway annoys me by never filming close-ups, this film never pulls back, which results in a very claustrophobic and unsettling experience.

There were two main problems with Personal Velocity. The first is the mysterious male voice-over, which sounds distinctly like a film school student. The second is that the film telegraphs all its punches (is that a mixed metaphor?). I could predict almost every event well before it occurred. Considering that each film did have repeated bookend shots maybe this was intentional, but it resulted in a film that didn’t excite and definitely never challenged me.

Irrespective of the personal slurs in Stuart’s review above, I quite enjoyed Personal Velocity, although it aims high and misses. Rebecca Miller’s film is at times challenging, often confusing, and ultimately frustrating. 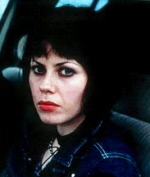 The three successively told stories, with minimal overlap between each, is an interesting form to use – the recent fad to tell multiple related but separate stories edited together, without an obvious or cohesive structure, was obviously felt passé. In this film, the structure works, and allows examination of one woman’s story alone and without interference, and preferably only on reflection are the overriding themes of abuse, disharmony, change and growth understood. (Although at times it seems obvious what is being communicated, if you can sit back and just watch and then think about it later, it will be a more enjoyable and moving film).

The performances by the leads are strong, although I’ve never really enjoyed watching Fairuza Balk, and continued to dislike her in this. Kyra Sedgwick is great, and Parker Posey is her usual Indie-self. (I think she was amazing in Josie and The Pussycats).

This film is not as emotionally challenging or abrasive as others in its genre, and is easier to watch for it – not necessarily a good thing. If some thought is given to the film after watching it, it can actually be quite rewarding. However, I’m not convinced its lofty aims were met, and it certainly needs some time to settle in before you can appreciate its strengths.