Tom Tykwer is one of my favourite directors, but I was never particularly excited about seeing his adaptation of Patrick Süskind’s novel. I enjoyed the book but found it rather sterile – I constantly felt held at arm’s length by its fairly intrusive narration. It turns out the problems I had with the book are also prevalent in the film. 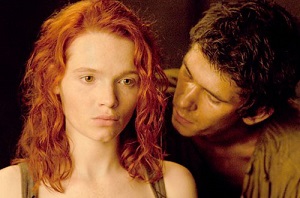 Jean-Baptiste Grenouille is blessed (cursed) with the most powerful nose in the history of humanity, and in the grimy, disease-ridden streets of eighteenth century France there’s certainly a lot to smell. His fascination for this sense leads him down a dark path, partly due to his ability to never truly fit in. In some ways it’s a Promethean tale (man striving beyond his reach, to almost become a god among men), but unlike Shelly’s ‘Frankenstein’ we’re never given a good explanation as to why Grenouille dreams of this. He isn’t selfish, neither is he driven by any need to help himself or those around him, but instead is a kind of idiot savant who step by step becomes a mass murderer.

Tykwer’s film certainly does justice to the book. Its epic scope and attention to detail make it one of the most impressive-looking period films of the last decade. The cinematography, editing and sound design are incredible – this is a remarkably realised eighteenth century. The acting is pretty good too, the only problematic performance coming from Dustin Hoffman (not to mention his patchy accent), who feels rather bland in a role a character actor would have relished. Ben Whishaw is perfect as Grenouille, and Alan Rickman is similarly well cast.

As I said, the major flaw with this film was evident in the book itself – it’s hard to know with whom we’re supposed to sympathise. Are we supposed to pity Grenouille as a victim of circumstance, or are we supposed to fear him? Should we rally behind the townsfolk baying for his blood or be horrified? As a ‘what if?’ (ie: traditional science fiction) story it’s rather interesting but lacks heart, despite Tykwer and co-writers Bernd Eichinger and Andrew Birkin’s injection of some last minute emotive sequences.

Perfume: The Story of a Murderer