I haven’t read Fever Pitch (though it’s on the list) and I haven’t seen the 1997 adaptation that featured Colin Firth, so I’m not in a position to compare the two films. In isolation, however, The Perfect Catch was a thoroughly enjoyable by-the-numbers affair. Barrymore (50 First Dates) is radiant as ever, although I wonder if she’s sick of making these lightweight romcoms. Jimmy Fallon (Taxi) is perfect, and his performance hints at a very broad acting range. Having a relatively fresh face in attendance certainly worked in the film’s favour, and the two performers bounce off each other wonderfully. The supporting cast seem a bit awkward, with some stilted deliveries, but this often seems to be the case with the Farrelly brothers’ movies.

The directing team have been fairly restrained in their latest feature – there’s only the faintest whiff of potty humour here. They may be getting soft after all these years, but The Perfect Catch certainly isn’t as overwhelmingly sentimental or quite the morality tale that Shallow Hal was.

Thankfully the film places the viewer in the position of the outsider, assuming that we, like Lindsey know little or nothing of baseball. This helps us to sympathise with Barrymore’s character, who effectively finds herself suddenly in a very alien culture. It was easy for me to relate to such a predicament: I can’t imagine anything worse than dating a sports nut.

As sickly sweet and predictable as it is, I found myself grinning like a dolt throughout most of The Perfect Catch. The main drawback is the top and tail voice over, which is horrendous (and almost offensive with its exaggerated accent) and certainly leaves one with a bad taste in the mouth. Though it sometimes tries too hard and often feels a little contrived, The Perfect Catch does what all romantic comedies should: it effectively tugs at the heartstrings and admirably encourages our cravings for a happy ending.

There have now been two film versions of a story based on Nick Hornby’s book ‘Fever Pitch’. Renamed The Perfect Catch for an Australian audience suspicious of shoddy American remakes of successful British produce – ‘The Office’ anyone? – this new version transplants the love of Arsenal FC to that of the Boston Red Sox.

Replacing Colin Firth as the obsessed sport fan is Jimmy Fallon, the nothing star of the abhorrent Taxi. To say that he is a step-down from the remarkable Mr Firth is an understatement comparable only with saying this film version is dreadful. Fallon brings the dramatic range of a coathanger to a role that offered a lot more. I know people like Ben, the obsessed Sox fan. I have been Ben in another time, and although I’ve left some of that behind, I can completely understand the passion, the frustration, and the love he feels, not only for his team, but for the lifestyle he leads in supporting them. Fallon is able to give Ben none of the depth required to satisfy anyone who has ever known anything of this life. 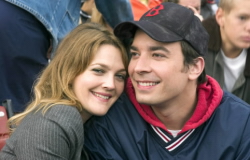 Which is not to say that the elements aren’t all there. I suspect Hornby’s text provided much of the character data for the Farrellys, and the responsibility for messing it up lies solely with them. Although they do seem to respect Ben – thankfully they don’t take the easiest route, which would be to ridicule him for his lifestyle – they aren’t able to truly show that although his passion for the Sox is subverting his progress as an adult human being, it is his life, and to change would be to lose too much of himself.

Drew Barrymore plays herself, although disappointingly she has performed better as Drew Barrymore in other films. Seemingly stuck in a romcom rut after the surprise hit The Wedding Singer, she seems to have only barely turned up for work. She is charming, and her lisp still registers on the adoro-meter, but one senses she can’t be too inspired playing this role over and over again.

Almost every decision made by the Farrelly brothers in the direction of this film went wrong. By trying to follow the ‘romcom 101 guidebook’ they fail to make anything that occurs even remotely surprising. Their attempts to inject colour into proceedings are horrible, the worst example being the shower scene. The handling of the critical moments that shape the characters’ destiny is trite and overbearing.

The final insult was the moment when they ripped off the soundtrack from Serendipity and played Nick Drake’s Northern Sky over the final montage of Fenway Park. Although it had its own problems, that film at least had real charm and some romantic magic about it, and John Cusack could take Jimmy Fallon with both arms tied behind his back and his eyes poked out.

While there are a few moments of standard romantic comedy lightness, they are swamped by the shallow handling of the characters. Given that the romcom oeuvre is hardly bereft of excellent examples in recent years, it will be a shame if The Perfect Catch is awarded anything more than the Foul call it deserves.