John Woo doesn’t seem to be quite as cool as he used to be. There once was a time (back when he first made his transition to Hollywood) that films such as Face/Off would guarantee big bucks at the big screen. I similarly remember when this was the case with Ben Affleck… oh, hang on… no I don’t. Here both Woo and Affleck set their sights on science fiction, a strange choice to say the least. (It’s true that Affleck was in THAT asteroid movie… But I tend to think of that film as being in the genre of ‘shit’ rather than ‘science fiction’). 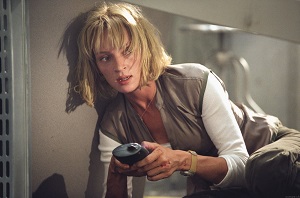 You know that short story by Philip K. Dick that was turned into a movie? The one set in the near future that puts into question the nature of identity and memory? Yeah, that’s the one… No, not Blade Runner, Total Recall, Impostor or Minority Report… I’m talking about Paycheck (a film that’s bound to annoy non-Americans with its krazy speling). Ok, so Dick has covered this ground before. But that’s ok, cos they’re themes that are always interesting.

This film was enjoyable enough. There’s nothing we haven’t seen before, but it’s fast-paced and fun. It’s interesting to see Uma Thurman as a co-star rather than going it alone (as we saw with the Bride in Kill Bill: Volumes 1 and 2). Here at least she gets to hug rather than chopping people up. Ben Affleck is Ben Affleck, who hasn’t given a truly great performance since Chasing Amy, and Paul Giamatti provides some nice comic relief.

It’s fairly evident that John Woo was responsible for injecting the film with some action sequences that were most probably missing from the script, and these are fun also. Thurman particularly gets some cheer-worthy moments, and there are a few of Woo’s trademark ‘silly stunts’ that look good on screen but seem to have no grounding in reality whatsoever.

I haven’t read any of Philip K. Dick’s work, but I’m sure he must have written something that wasn’t about the deconstruction of memory and identity in the near future. Maybe we’ll see something different one day…