Watching eighteen 5 minute films back to back is a rather tall order, and Paris, je t’aime is probably as successful as such a concept will ever get. 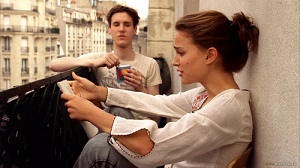 The collection of short films from well-known directors all around the world is a diverse and varied bunch, excepting for the fact that they’re all love stories. Each film was relegated a certain section of Paris, for instance the Coen brothers utilise the Tuileries metro station, and Vincenzo Natali gets Quartier de la Madeleine. Natali’s film stands out from the throng actually, mainly cos it’s a highly stylised vampire love story featuring Elijah Wood(!) The rest of the film has its ups and downs. A very crusty Nick Nolte takes a stroll with Ladivine Sagnier (from Swimming Pool), Maggie Gyllanhaal takes more than a business-like interest in her drug dealer, whilst Juliette Binoche has a rather mystical meeting with Willem Dafoe. All the films manage (believe it or not) to have a beginning, middle and end. The transitions from one to another can sometimes be sudden, other times the films are divided by a fade to black. To make it a little more confusing there are several title credits spattered about the feature, though I have no idea what system they were following.

It was years ago now (2004, in fact) that I heard about my favourite director Tom Tykwer doing a film with Natalie Portman (surely a match made in heaven!). After some time I found out that it was a short film rather than a feature, and that it was the flagship, or test model for the Paris, je t’aime project devised by Tristan Carné and Emmanuel Benbihy. Now I am of course biased, but Tykwer’s film True is far and away the best of the eighteen. The extraordinary ability of Tykwer to coax an emotional response in such a short time is incredible. My heart was aching for the main characters before the halfway mark. That’s about TWO MINUTES IN! It’s fairly similar to Run Lola Run (Lola Rennt) and The Princess and the Warrior (Der Krieger und die Kaiserin) in tone and shows off his usual repertoire of superfast editing mixed with beautiful cinematography. I really can’t talk up this segment enough. It certainly made up for the visually stunning but emotionally bereft Perfume: The Story of a Murderer.

Paris, je t’aime is a mixed bag. I can imagine that the unusual structure might frustrate or turn off many viewers, but it’s certainly worth a watch.

←Curse of the Golden Flower Spider-Man 3→