I’ve been trying to ascertain what it is that I like about the Paranormal Activity franchise. The fact that the films are usually confined to a single location is the first, most obvious reason. The second would be the low budget nature of the series, which encourages the filmmakers to get a little more creative. The third is the found footage format, of which I’ve never grown tired. The fourth is their regular emphasis on subtle scares, rather than loud, in your face moments. Finally, it’s the slow construction of the meta-narrative that keeps me hooked, revealed piece by puzzle-like piece. 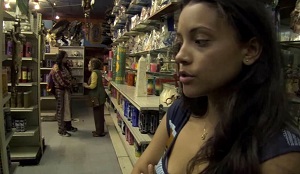 Paranormal Activity 2 was the really surprising one; a film that made clear it was expanding the boundaries of the franchise, rather than simply repeating the first instalment. From that point onwards, the story has become bigger and more complex, but unlike the previous annual horror series, Saw, this one isn’t quite so labyrinthine in its plotting. For the most part, fans have been able to follow the meta-narrative with reasonable clarity.

The Marked Ones was initially announced as a spin-off from the main series specifically aimed at the Latino community, who apparently make up a large portion of the PA audience. Having seen the film, I can now tell you that ‘spin-off’ isn’t an appropriate term. This is pretty much a full-blooded sequel. In fact, I’d say that The Marked Ones is the PA film that has the strongest ties to that which came before.

Set in 2012 in Oxnard, California, the ‘found footage’ is that of friends Hector (Jorge Diaz) and Jesse (Andrew Jacobs), who notice that there’s something weird about their downstairs neighbour, the cranky old Anna (Gloria Sandoval). Amid whispers of bruja, they decide to investigate the goings on in their apartment block. Together with Marisol (Gabrielle Walsh), they soon uncover evidence of demon worship and a coven right beneath their feet.

The major disappointment with this instalment is that the performances aren’t as strong. Even though PA 4 was underwhelming overall, at least the characters were as likable and believable as those who had come before. This time, the performances feel awkward and occasionally amateurish.

The next thing to note is that the film isn’t scary. At all. Then again, that’s been the case since number 3. 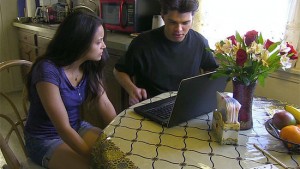 The main reason for this is that they seem to have done everything possible within the confines of their own rules. This doesn’t bother me much anyway, since I still find the films entertaining. The budget seems to be much higher this time around, and there’s a clear increase in the amount of wirework stunts and CGI. The change into a more action-heavy film (comparatively speaking) is a welcome one, because the series will have to continue to evolve if it wants audiences to keep coming along to the cinema.

The Marked Ones plods along amiably enough, feeling like a bit of a crossover with both End of Watch and Chronicle, but then kicks into high gear during the climax. This is where the film really starts to tie together the threads left dangling from the previous entries. After the frustrating amount of new questions posed in PA 3 and 4, it’s nice to finally have things begin to coalesce.

Of course, this film is only for the fans. If you didn’t like any of the previous films, you won’t like this one either, and if you haven’t seen any of the previous films, you’ll be completely bewildered at the significance of many callbacks, moments and scenes. For me, however, the PA franchise keeps chugging along, and I look forward to the next one.

Paranormal Activity: The Marked Ones