Film number four takes place after PA2. In fact, it’s set in 2011, so it’s the most up-to-date setting of the entire series. The setting has switched states to Nevada, and our main characters are 15 year old Alex (Kathryn Newton) and her friend/would-be boyfriend, Ben (Matt Shively). There’s a creepy kid living across the street (Bradie Allen) who keeps wandering into Alex’s yard, and it’s when her family lets the boy into their home that the freaky stuff begins.

The performances are great, which is par for the course in the PA films, and Alex and Ben are particularly likeable central characters. As usual, none of the actors are bona fide stars, so giving the film that documentary-type feel is a breeze. 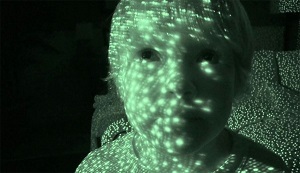 That said, PA4 is easily the worst entry in the series. I am still held captive by the ongoing narrative (and I dearly hope that they one day provide us with some closure) but the main problem would have to be that this film wasn’t even remotely scary. There are jumps to be had, sure, but the sense of dread I felt in the first three films is completely missing here. There is an amusing example of product placement courtesy of Xbox Kinect that is a bit of fun, but aside from that, there’s very little inventiveness this time around. We also get some videophone call footage – one wonders if the filmmakers caught the horror anthology V/H/S earlier this year which used the same idea with better results – and, because it’s 2011, we get some scenes recorded on an iPhone. Of course, this is apparently an iPhone from the future, since it looks suspiciously like HD even when blown up to cinema screen size, but I was able to suspend disbelief nonetheless.

I rewatched Paranormal Activity 3 the other day and actually enjoyed it a lot more than I did on the first occasion. Director Henry Joost and Ariel Schulman filled that film with a multitude of shocking and cleverly constructed moments. Number 4, on the other hand, feels kind of sparse in comparison. In case anybody was wondering, the initial trailer for this film is another case of false advertising – as with PA3, most of the footage didn’t make it to the final cut.

We shouldn’t expect any different at this stage, but fans should be aware that this film asks a lot of new questions, and doesn’t go towards explaining any of the unanswered ones posited by the third film. I wouldn’t be surprised if the next film (and let’s not pretend there won’t be one) is another prequel, perhaps focussing on Katie and Kristi’s teenage years, with the film after that being a direct sequel to this one, chronologically speaking.

There is still enjoyment to be had from this franchise – putting the pieces of the puzzle together is an enjoyable process – though they’d better start clearing some things up soon otherwise they’ll test the fans’ patience. Oh, and there’s a reason to stay to the end of the credits, also…