The setup is simple: the young Mélanie Prouvost fails her piano exam thanks to the distractions of Ariane Fouchécourt, one of the examiners. Years later she works her way into the employ of the now fragile Ariane, slowly gaining her trust whilst plotting her revenge. 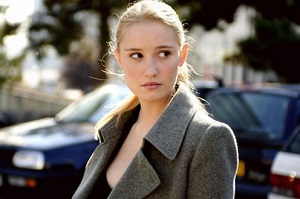 The Page Turner is a modest film: subtle in its drama yet blunt and direct in its actions. As the older Mélanie, Déborah François (from The Child (L’Enfant)) seethes with anger every step of the way, yet outwardly appears uncannily serene. We get the occasional smile, but she more often simply stares in a detached manner as she goes about her plotting. It’s unclear just how many of her actions are planned, and how many are simply spur of the moment decisions, but if she ever entertains second thoughts the audience aren’t privy to them. Ariane (Catherine Frot) is the most timid of victims. She’s become a brittle and insecure older woman who desperately needs support and unfortunately looks towards Mélanie for just that.

There are no subplots in The Page Turner, nothing to distract us from Mélanie’s cunning manoeuvres, and this bold simplicity is a welcome addition to the growing list of super-twisty thrillers that fill our screens every year. The film rarely alters its steady pace and the conflict is understated, but co-writer and director Denis Dercourt’s faith in his performers is absolute. The dialogue is kept to a minimum – it could even be a silent film, so powerful are the unspoken moments between the characters.

The concept of a page turner is of course perfect fodder for a thriller. That a performer would lay such trust in the hands of someone else is a terrifying thought, and it’s little wonder that Ariane doesn’t let just anybody do the job for her. What is surprising is that (to the best of my knowledge) this particular power relation hasn’t been examined in film before.

There’s nothing particularly challenging about The Page Turner, and it isn’t afraid to let the plot unravel in the exact manner we expect. Déborah François’ performance makes this film – the opportunistic Mélanie is sexy, conniving and opportunistic, yet also an eerily detached representation of vengeance. One of the best performances of the year thus far.

←The U.S. vs. John Lennon Pirates of the Caribbean: At World's End→