What do you do when you meet the nominal, physical, spiritual and artistic doppelganger of your long-dead but never-quite-gotten-over first love? What if you happen to be in a position of power that both ethically and morally forbids you to take any of the actions you so desire? Louise Harrington faces just such a problem when F. Scott Feinstadt walks into her office, and we the audience face it too. Were these issues more deeply explored, P.S. could have been an exceptional film – as it is, it remains only a solid romantic-drama.

Featuring yet another stunning performance by Laura Linney (Love Actually), and continuing the good work by Topher Grace (In Good Company), P.S. sadly fails to rise to the same heights as its two stars. That’s right, Topher Grace now commands the title of ‘star’. Having cut his teeth on TV’s ‘That 70’s Show’, Grace featured in Traffic and Mona Lisa Smile, before his biggest year yet in 2004 saw him co-star with much more seasoned performers in quiet achievers In Good Company and P.S. (as well as the wretched teen-flop Win a Date with Tad Hamilton!). With the amazing Laura Linney, they form a duo of some appeal. The opening scenes, showing their first meeting and then one of the most powerful portrayals of female sexuality in my recollection, are beautifully made, and set this film up wonderfully.

Sadly, the promise of the first stanza fades a little in the journey, as distractions mount up, and the focus is lost. Should Louise be doing what she is doing? Is it an abuse of the vastly younger Feinstadt? Do the trials of Louise’s life mean we feel less strongly about the moral import of her actions, or is she somehow excused? Only partially addressed, this forms the most disappointing aspect of this film. The performances are almost wasted on a script that ended up so toothless in the face of the questions it raises.

With several unnecessary detours including the addition of Marcia Gay Harden as Louise’s duplicitous ‘best friend’, P.S. meanders towards an unsatisfactory conclusion. Whilst failing to meet its own lofty standards, it is entertaining if one can forget that it could have be outstanding.

This has to be one of the most frustrating releases of 2005. I have to say I’m in agreement with Mark and several other critics in regards to P.S. – it could have been fantastic. 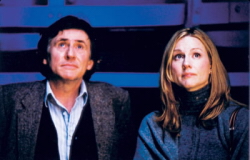 It has such a strong first half – Linney and Grace are fantastic. The former of course has already proven herself time and time again, from You Can Count On Me to Mystic River (although her skills were vastly underutilised in Eastwood’s overrated drama), and Grace seems to be getting better and better. His character is P.S. is a long way from ‘That ’70s Show’s Eric Foreman – here he is cool, confident and sexy – a big step away from In Good Company‘s Carter also. Gabriel Byrne puts in a solid performance too (and he seems to have aged rather suddenly).

The central premise of the ‘older woman/younger guy’ works really well here, and I could have quite happily done without the Birth-like mystical subplot. The (rather rushed) courtship of Louise and F. Scott is charming, and you do want things to work out for these two, which is, of course, how one should feel when watching an onscreen romance.

But then we are subjected to such a terrible final act that it’s almost beyond belief. Trite, unbelievable and downright insulting to the viewer. Did the writer die and someone take over? Someone with the mental capacity of a chihuahua and maybe similar typing skills? That’s all I can come up with… I’d be interested to know if Helen Schulman’s novel was just a disappointing.

I’d seriously recommend only seeing the first half of the film – no closure is better than the resolution provided in P.S. The final act really left a bad taste in my mouth, as my rather low rating testifies.

←Campfire Charlie and the Chocolate Factory→