The Orphanage hits all the right notes as a psychological horror film. A rather traditional ghost story, it concerns Laura (Belén Rueda) and her husband Carlos (Fernando Cayo), who move into the old mansion in which she was raised as an orphan. With them is young Simón (Roger Príncep), who has a rather severe case of ‘I see dead people’, which Carlos dismisses as a normal case of childhood imaginary friends. 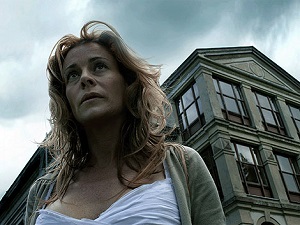 There are all sorts of cinematic shorthand on display here. The words ‘orphans’, ‘lighthouse’ and ‘masks’ all let us know exactly what sort of horror film we’re in for, and despite this, The Orphanage is pretty effective. There are some top-notch scares, even if they’re ones we’ve seen before. Director Bayona and co. know how to set up a creepy scene, and – perhaps more importantly – the actors make it credible. Once Laura enlists the help of a psychic to help them out, the sequence that follows is ludicrous, but still successful in generating dread.

The Sixth Sense resurrected cinema’s interest in the classic (or English) ghost story nine years ago, and the genre’s run is surely slowing down now. There are certain things we’ve come to expect in recent years. The ghosts are almost always trying to tell the main characters something; they just can’t seem to manage it without scaring the bejesus out of them – a pity, really. If the departed could simply voice their complaint in a concise and banal manner, it wouldn’t take the length of an entire film for them to find peace.

The Orphanage is a good example of the genre, though perhaps I’m getting a little tired of it. I want to see a ghost film that doesn’t conform to expectations. Aside from the position this film holds temporally, my only other complaint would be regarding Laura. Though she has a backstory, there’s something missing. Her motivations are driven by maternal instinct, one supposes, but that isn’t enough. The interplay between her and her husband is problematic, also. In true horror film fashion, he’s the sceptic, though we’re given no reason why. It’s as if the screenplay is relying too heavily on cinematic shorthand, and it doesn’t really question why she would be so determined, and why he would not.

If you’re after a decent ghost movie, The Orphanage certainly fits the bill. The scares are imaginative and well orchestrated, and the film has a similar tone to the superior The Others. Anyone who’s seen their fair share of such films in recent years, however, may be left craving more.