Open Water is by no means a well-rounded film. There is little in the way of subplot, nothing particularly fantastic about the script, and the cinematography is the best one can expect from digital video and nothing more. 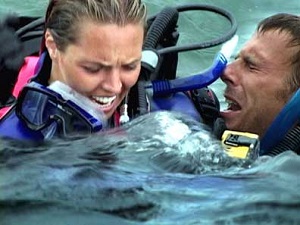 Nevertheless, Open Water is an extraordinary achievement, and a superb film. The situation the two lead characters find themselves in is pretty much all this film has to offer, but boy… it does this masterfully.

I can’t remember the last time I was on the edge of my seat for such a long time. It’s the ever present nature of the threat that keeps Open Water from becoming boring. The situation is absolutely terrifying, and brought to the screen perfectly.

The performances are very good, and most importantly Ryan and Travis work well together. In the entire film there was only one scene that didn’t ring true, and the rest of the time I truly felt that these two loved each other.

I had hoped that the camera would stay with these two the entire time, but there is the occasional cut back to civilisation that I think serves more as an interruption than a reprieve.

With regards to the cinematography, I have heard some complaints about the digital video approach the filmmakers took. Being used to Lars Von Trier’s work, as well as a host of independent films, this didn’t particularly bother me. After five minutes had past I pretty much forgot that I wasn’t watching clean and shiny film. Much of the success of this film is due to the filmmakers’ attempts to make this as real as possible. Firstly the digital video succeeds in making you feel much closer than film ever would. Then of course there’s the real sharks. And other creatures. There are almost no special effects here (excepting maybe some done in the editing process).

Open Water will definitely be remembered: there is no other film quite like this.