Rave films are interesting. Whenever I’ve spoken to anyone who frequents raves they’ve told me that Groove is a terrible rave movie. I love that film. They also said that Human Traffic was a good rave movie. I thought it was an okay film. More recently I was told that One Perfect Day is a great rave film. Guess what? It isn’t very good.

Now, there are many things that do work in One Perfect Day. This film looks wonderful. The cinematography, set design and editing all work well together to create a visually stunning film. 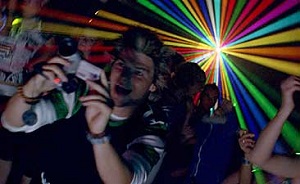 The acting is great too. I’ve been having fun seeing actors from the old ABC series ‘Raw FM’ pop up in films recently. Even if we excuse Nadine Garner (who’s been in heaps of productions for many, many years) there’s been Matthew Dyktynski in Japanese Story, Dominic Purcell in Visitors, and now Dan Spielman in One Perfect Day. He does a good job as the lead character, even if it’s a bit hard to understand exactly what this young man seems so happy about all the time. There’s also a pre-Somersault Abbie Cornish.

The main problem is simply that One Perfect Day has a pretty crappy story, and very average script. These characters wander from one extreme to another in such an unbelievable fashion. As I said, the entire cast manage admirably, but it’s not enough. I didn’t get a chance to feel for the characters because they were constantly pushed to the limits of human experience in such an unrealistic manner. And then there’s some events that were just a bit too hard to swallow. I mean, hijacking a concert hall? And the public transport corporations of the world aren’t going to happy about Tommy’s behaviour at the train yard.

So I’ve come to the conclusion that raves don’t provide good backgrounds for films. Or at least realistic raves don’t work. I still think Groove is the best film of this kind to come out.