Another day, another Hollywood horror remake. This one’s less impressive than The Hills Have Eyes, and probably a smidgen better than The Fog, though that’s not saying much. Julia Stiles and Liev Schreiber sound like perfect casting on paper but John Moore’s direction simply leaves them nowhere to go. Their first few scenes are woeful – it’s as if they’re acting in a vacuum, aware of neither their surroundings nor each other. Not once could I believe that these two were a loving couple. As for Damien himself, newcomer Seamus Davey-Fitzpatrick does a great job, however I must admit most of the time his scowls gave rise to laughter rather than provoking dread or unease. 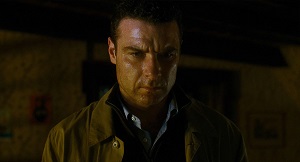 Michael Gambon and Pete Postlethwaite are included in the supporting cast, and this fact makes you wonder exactly how many seconds the casting agents spent before ringing up such predictable performers (why does it seem that Pete Postlethwaite has very low standards when it comes to accepting jobs?). Mia Farrow is the only ray of light in this film, and was perfect in the role of Damien’s nanny – she can certainly look creepy when necessity demands.

The Omen makes no attempt whatsoever to sway from the original – which was a decent film – but at the same time manages to be incredibly dull. It seems that David Seltzer wrote both this and the original film, and his next atrocity is to be Strangers on a Train (now there’s something we need – a Hitchcock remake! Remember how good Gus Van Sant’s Psycho was?!) There are a couple of creepy dream sequences in this remake and one great action moment but that’s about it. Two thirds of the way through the film turns into a Final Destination sequel also, which is something we definitely don’t need.

The cinematography is pretty yet the sets have the capacity to sometimes look awfully like, well… sets – check out the dodgy graveyard. Even the score manages to disappoint.

I saw this with two friends who hadn’t seen the original, and they were just as bored, so it seems that The Omen has very little to offer anyone. Not to be satisfied with merely being dreary, the film also manages to have the gall to slip in lazy references to the World Trade Centre Towers attack and the Boxing Day tsunami.