I have to admit that the words ‘from the director of Long Time Dead‘ don’t exactly inspire confidence. But I was so impressed with the cast in Octane that I decided to hire it. I also remember thinking during Long Time Dead, a film that failed on most points, that Adams had the potential to produce something great. 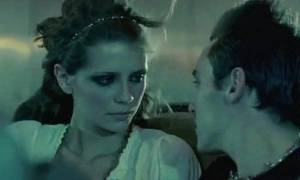 Octane is awesome. For the first hour or so I was completely entranced… and I’m talking about full-on 100 percent of my attention devoted to the screen. What’s going on? Why is this happening? What’s going to happen next? For someone like me who has seen a hell of a lot of movies, it’s a pretty good feeling to have, echoing the glory days when films could still surprise me.

Octane is a great thriller. Borrowing from classic road movies such as The Vanishing (Spoorloos) and The Hitcher, Adams has crafted an exciting, suspenseful and surprising movie that never failed to entertain. I was a bit annoyed at the lack of overall clarity – I wanted answers, dog namnit! But it’s certainly much better than having everything wrapped up beautifully in a neat little bundle.

There’s a wonderfully subtle, hallucinogenic feel to this film, and the cinematography is fantastic. With regards to the cast, they all do well, excepting maybe Norman Reedus who had a bit of a dud role. I’ve loved Madeleine Stowe since 12 Monkeys, and I’ll always watch anything with Bijou Phillips in it. Mischa Barton has certainly been keeping up appearances since Pups (but not her weight), and Jonathan Rhys-Meyers absolutely devours his role.

Everyone knows that the big studio pictures are ‘safe’ productions – there’s a lot of money tied up in them so studios are unlikely to take any risks. It’s the films between the blockbusters and the indie flicks that can provide really interesting stories. Often filled with the actors that Hollywood doesn’t care about any more (for instance Madeleine Stowe), these films can do things the big studios can’t. God bless ’em is all I can say! I’d rather have Octane or Session 9 than I Still Know What You Did Last Summer or Gothika any day.

Don’t be fooled by the crappy cover, this is a great film.