In the past Jim Carrey has certainly proven himself willing to venture from the slapstick – as evidenced by Eternal Sunshine of the Spotless Mind and The Truman Show – but with The Number 23 he takes a leap into the unknown. 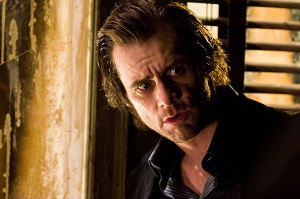 I imagine Carrey would have been frustrated at my particular screening – people laughed at him. Even in the most serious roles it’s hard not to laugh at someone like Carrey, and a similar situation occurred with Will Ferrell in Stranger Than Fiction. Not that Carrey isn’t up to the task. Virginia Madsen and the seemingly ubiquitous Danny Huston perform admirably within the constraints of Fernley Phillips’ rather silly script.

That’s the main problem really – the narrative is a bit too far fetched. I’m sure this has to do with execution rather than subject matter, cos twisty-thrillers can be unlikely yet still believable (think The Village or even Hide and Seek), but The Number 23 seems a little too crazy. The initial concept is interesting, though the writer doesn’t take it much further. Dogcatcher Walter Sparrow reads a book about a man’s obsession with the number 23, and before you know it he starts to manifest the same symptoms.

As Walter reads the book we’re treated to hyper-noir visualisations featuring Carrey and the rest of the cast playing alternate characters and sometimes even repeating lines with a different emphasis. Whilst it might have been fun for the thespians, it’s hard to keep a straight face when Good Carrey has a fringe and Evil Fictional Carrey has slicked back hair and tatts. The film is over stylised and often too cluttered with bold colours, snappy editing and flashbacks within flashbacks.

The supremely erratic Schumacher (did he really direct Batman & Robin and Tigerland?) misses the mark here. In a brave move, the script has Walter almost immediately tell his wife and son of his conspiracy-laden suspicions, but rather than alleviating the usual thriller frustrations this just opens up a whole lot more inconsistencies. It’s most similar in tone to Schumacher’s 1990 movie Flatliners, though nowhere near as effective. It is fun to spot the 23s littered throughout the film however…

←The Dead Girl Lucky You→