I don’t envy the role of the Oscars judges. Having to decide between Judi Dench in Notes on a Scandal, Meryl Streep in The Devil Wears Prada and Helen Mirren in The Queen would have been a horrid choice. All three gave stellar performances in very different roles, and all three have shown the rest of the acting world just how it’s done. 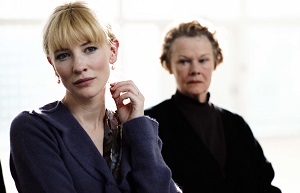 Despite the fact she always manages to act the socks off everyone else in the game, Judi Dench outdoes herself in Notes on a Scandal. As the initially unapproachable high school teacher Barbara, she crackles with energy from her very first appearance. This is a woman who’s been in the public school system a very long time, and knows instinctively how to keep the kids under control. Her own habits, however, are barely restrained at the best of times. We are constantly privy to her thoughts as Barbara’s diary readings narrate the entire film, and strangely enough the ever-present voiceover works. We slowly get to find out just how this woman can be equal parts pathetic and predatory, depressed and destructive.

The new arrival on the schoolyard scene is Sheba, played with utter sincerity and fragility by Cate Blanchett. Not only does she let the kids walk all over her, she lets temptation get the best of her, and unfortunately the role of ‘straightening her out’ falls to Barbara.

Notes on a Scandal plays out like a hyper-paced thriller, and it’s sometimes almost a little too extreme. Philip Glass’ insistent score, though brilliant, can at times be overwhelming. His ubiquitous tunes are so insistent that sometimes you wish he’d quieten down a bit. That being said, it does serve to give the film a sense of urgency, of a frantic determination that mirrors Barbara’s drive to get what she wants.

Not enough can be said about Dench. Her utterly unselfconscious performance would have been clichéd or over-exaggerated in anyone else’s hands, but she handles the task masterfully. Blanchett’s character, though initially well-meaning, is just as flawed, and it’s wonderful to see a film that doesn’t give us any ‘nice’ characters with which to side – instead revelling in a glorious and bleakly grey situation where there are no easy solutions. Bill Nighy is wonderful in a supporting role as Sheba’s husband, and I couldn’t help but notice how much better he is when not wasting his time in crud like Underworld.

Adapted by Patrick Marber, who also wrote the stage play and film Closer, Notes on a Scandal seems a little more blatant than my memory of Zoe Heller’s book. We get a glimpse of Sheba’s indiscretion rather early and in a matter of fact manner, whereas the book deliberately held off telling us the naughty bits until much later. This much more vibrant, almost operatic version of the story certainly makes for great viewing, even if the trailer gave away a little too much of the plot.

Notes on a Scandal