From writer-director Matthew Saville comes a potentially stunning film that frustrating falters at the most crucial of moments. 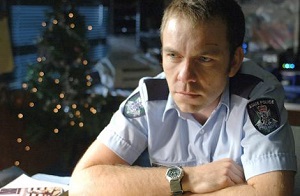 As one would have hoped with a film called Noise, the soundtrack to this film is practically a central character. Constable Graham McGann is suffering from tinnitus, and as his symptoms get worse, they also begin to appear in the film’s soundscape. The difference between silence and the explosion of gunfire is deafening (not quite as loud as Miami Vice, but close).

I don’t remember ever seeing a seedier version of Melbourne. The dingy train station that opens the film is such a moribund, depressing place that I would never step foot inside, except for the fact that I do every week. The set dressers went out of their way too – the apartment shared by Graham and his girlfriend Caitlin is decked out with more crappy 70s and 80s furniture than you’d find at your local op shop.

The cast of Noise is brilliant. Brendan Cowell from TV’s ‘Love My Way’ gives one of the best performances of the year as Graham – an entirely likeable person, yet at the same time rude, lazy and sometimes a bit of a dick. Cowell expertly manages to balance these conflicting traits so that we still sympathise with his situation. The supporting cast is fantastic, from Karen Wall as Brendan’s girlfriend to Nicholas Bell – a veteran of Aussie TV and film – as Senior Detective Noel Birchall.

With Noise we have a film that both conforms and challenges the expectations of the genre. Graham may be a down on his luck, depressed cop, disliked by his superiors, but surprisingly the serial killer storyline serves more as a backdrop than the primary focus of the feature. Then take into account that most of Graham’s police work will involve sitting in a van day after day in the vicinity of a recent crime, chatting with anyone who happens to approach him, and you’re left with a very non-conformist cop movie. The dialogue is fantastic – there are no one liners amongst the slang and lackadaisical conversations. The interaction between Graham and civilians, his workmates and his girlfriend is unparalleled – this is one of the most naturalistic ‘genre’ films I’ve seen.

Unfortunately the film stumbles in some crucial moments – shifting in tone so dramatically as to jar against the rest of the film. It’s a pity, because it gets damn close to being perfect.