It’s important that readers realise just how much I love Darren Aronofsky’s 2006 film, The Fountain. Pretentious, often irritatingly obtuse and self-indulgent, it’s still one of the most profound cinema experiences I’ve ever had. It’s also important to realise that very few people agree with me on that film. So, take my review of Noah with a pinch of salt. 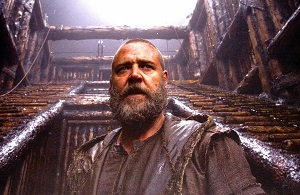 Noah and his family eke out a simple existence on the desolate proto-Earth, scrounging for food and endeavouring to avoid the marauding Mad Max-like hoards, the descendants of Cain. One night, Noah gets some maddeningly obscure head-movies supposedly delivered to him by God. Like a doomsayer’s weather report, they seem to suggest that the Sky Bully is planning on reformatting Earth’s hard drive, which means that it’s up to everyone’s favourite vegetarian superhero, Noah, to save all the world’s animals.

How does he do this? Well, he builds a big shipping container, that’s how. The plan is to become the world’s first high seas smuggler, cramming as many species as he can into the floating box, ‘The Wire’ season 2-stylee. Only he and his family get to go because, well, apparently they are the only Nice Guys left on Earth. How does he know this? Well, he doesn’t. But there you go. I’m sure he had his reasons. After all, all those other people were eating meat and stuff. God is pretty vindictive in his absence here, though anyone familiar with Aronofsky’s work knows that the writer/director isn’t about to include a big spectral bearded chap explaining to Noah the difference between Sumerian cubits and Egyptian royal cubits.

Whilst this is Aronofsky’s first truly big budget movie, the auteur is still very much present in the finished product. After flirting with the mainstream in the past – he very nearly directed Batman: Year One (which later became Batman Begins) and The Wolverine (which later became, um, The Wolverine) – Aronofsky apparently had a cool $120 million to play around with here. And it’s great to see that Big Budget Aronofsky isn’t too different from Low Budget Indie Aronofsky.

The film is aided by Clint Mansell’s fantastic soundtrack, which has more than a passing resemblance to his work on The Fountain. In fact, Noah is tonally quite similar my favourite Aronofsky film, but with bonus tsunamis and stone giants. 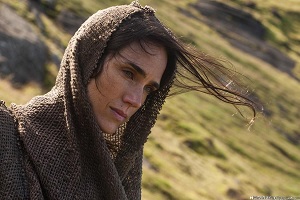 It’s kind of The Fountain meets The Lord of the Rings meets The Road, and I had a lot of fun. As a disaster movie, it’s definitely more enjoyable than anything Emmerich has put out, and there are some great performances to be found.

Crowe puts in a decent performance as the last antediluvian, whilst Jennifer Connolly is similarly strong as his wife. Emma Watson continues to prove that she was arguably the most talented of the Harry Potter young ‘uns, whilst Anthony Hopkins is his usual effortlessly charismatic self.

Aronofsky throws as much symbolism as he can at the screen to see what sticks, which isn’t surprising given the source material. Some of it works, some of it doesn’t.  That said, there are some startling images, particularly in the first half hour. In fact, the only complaint I had with the film was that the final act was rather dull; all the good stuff is in the first half.

It’ll no doubt infuriate atheists and god-fearing folk in equal measure, but for my money, Noah was a pretty decent use of 2.5 hours. There are enough weird elements to keep this from being a ‘safe’ (read: boring) Biblical epic, and Aronofsky remains a brilliant actor’s director. Plus, it’s hard to go past the image of bearded men yelling at the sky in anger whilst a flood rages around them.