Those who attempt to make a serial killer movie these days have quite a challenge ahead of them. You can endeavor to shock an audience that has already been presented with the horrors of Se7en, but this is a very difficult task – as can be seen when attempted by imitators in films such as Russell Mulcahy’s Resurrection. Alternatively you can stick within the mystery killer sub genre and simply have a good story with lots of twists (as in Kiss The Girls). Or you can simply make a run-of-the-mill thriller with little of the past two elements. This last option is Nightstalker. 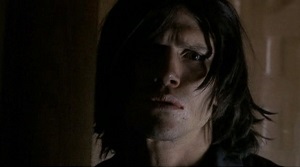 Even keeping in mind that this is quite a low budget film with no star power (excepting Treju who I assume had a large role in getting this film from paper to screen), Nightstalker is fairly weak on most points. The plot is predictable and sometimes defies logic, the script is horridly cliched and cumbersome in parts, and the acting is nothing special. In fact for the first thirty minutes I was ready to watch the rest of the film in fast forward.

By the end, however, I was quite invested in the story. It helps that this film is set in 1985, and thus can examine certain sexist and racist undertones that arguably aren’t as prevalent in today’s society.

The best aspect of Nightstalker, however, is the editing. Similar at times to the opening moments of Spun, the frantic cuts and frenzied moments are sped up to such an extent that one sees only glimpses of what is happening. This method is particularly effective at getting inside the head of our delightful killer (although no back story is provided to justify his motives – he simply seems to be a nutter.) The glimpses of the demon are particularly effective, and give this film its distinctive look. In fact these sequences seem to make the rest of the film look bad – grainy and colourless shots that aren’t particularly well framed.

Nightstalker doesn’t really deliver on most points, and there is very little tension evoked during the scarier moments. Anyone interesting in editing, however, should definitely see this film.